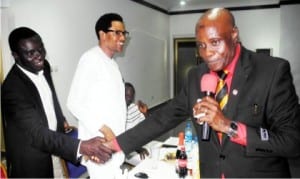 Comptroller of Immigration in Imo State, Mr Abba Idu (left), in a hanshake with the Director, Religious Affairs to Governor Rochas Okorocha of Imo State, during a prayer summit to celebrate the successful conduct of 2015 general elections in Oweri on Saturday. With them is the Director of Protocol, Imo State Government House Chapel, Mr Jerry Okosun.

A non-governmental
group, Anti Corruption Awareness Organisation, has petitioned Governor Ifeanyi Ugwuanyi of Enugu State over alleged corrupt practices in the education sector of the state.
The group which claims to be working in concert with all law enforcement agencies chronicled the alleged anti-education and self-serving policies perpetrated by some government officials.
The petition, signed by its Director of Intelligence, Mr Chijioke Attah, and a member of its legal team, Mr Josephat Omeke, was released to newsmen in Enugu.
It stated that recent developments in the sector had exerted set-backs to the good intensions of the government to promote affordable education for the residents of the state.
“The state government offered free education to ease the burden of parents and guardians of pupils and students in our primary and junior secondary schools.
“However, our investigations reveal that certain elements within the system work to frustrate these good intensions of the state government,” it stated.
The petition stated that there was a massive fraud in the posting of school principals, which was done in connivance with some government officials.
It alleged that for any principal to be posted to a secondary school, such person must pay between N250,000 and N300,000 depending on the student population.
“To post the principal and allow them to remain there, they must continue to pay gratifications to certain officials, else another higher bidder will replace them,” it alleged.
It also alleged that the introduction of scratch cards as the only means for students to see and obtain their examination results was ill-timed and in bad taste.
“The fraud associated with the scratch card is bad. The real cost of the card as ascertained from the producers is N150 while students buy it at N800.
“Some principals capitalise on the foundation of the fraud and increase the tally to N1,500 per student.
.”Some secondary school bursars connive with some elements to present a manipulated data of students to some principals in order to keep part of the school fees, P.T.A levies and others.
“Such incidence was recently discovered in Community Secondary School, Amagunze, which resulted in the transfer of certain principal officers of the school,” it alleged.
The petition further alleged that other facts previously unknown about the intrigues, lack of integrity, transparency and non-accountability in the system were unearthed in the course of the investigations.
“Your Excellency, we strongly believe that further detailed investigations will go a long way in sanitising the school system in Enugu State and posterity will always remember you,” the petition stated.
Efforts to reach the Permanent Secretary in the Enugu State Ministry of Education, Mr Augustine Udeh, was not successful as his phone was switched off.