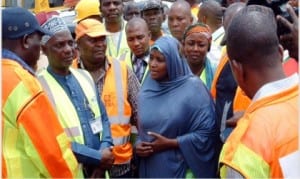 Permanent Secretary, Federal Ministry of Aviation, Hajia Binta Bello (middle), speaking with the rescue team at the scene of Wednesday’s crashed helicopter, as two more bodies were recovered at Oworoshoki in Lagos, yesterday

The Senate Minority Leader, Godswill Akpabio, yesterday lamented the worsening state of the country’s power sector.
Speaking in support of a motion moved by Senate Majority Leader, Ali Ndume, regarding the disconnection of Maiduguri from the national grid and general power generation in Nigeria,  Akpabio said the oil producing states in Nigeria contributed about $5.1 billion to the development of the power sector in 2011, but nothing tangible came out of that gesture.
“In 2011, when I was governor, we from the oil producing states decided to forgo about $5.1 billion to the Federal Government for the development of electricity. But it is sad today we are here still where we are, and celebrating generating only 4, 600 megawatts,” he said.
Akpabio expressed sadness over the closure of businesses in the country owing to electricity challenges, urging the Senate to adopt a definite and holistic approach to solving the problem instead of always “looking at the government (executive).”
After a brief debate on Ndume’s motion, the senate directed the Transmission Company of Nigeria (TCN) to immediately reconnect Maiduguri to the national grid.
It also set up an ad-hoc committee on power to carry out a holistic investigation on the management of funds appropriated to the power sector since 1999, and the unbundling of the Power Holding Company of Nigeria (PHCN).
Akpabio, therefore, urged the senate to do all within its power to assist the Federal Government in bringing an end to the problem.
In a unanimous adoption of the motion, the lawmakers expressed concern that Nigeria with a population of over 150 million people produced only 4, 600 megawatts of electricity.
They said that the situation in the country was in contrast with South Africa, which with population of about 40 million people produced 40,000 megawatts.
They observed that disconnection from the national grid and low generation of power supply across the country had affected economic activities, including collapse of many industries.
They added that it was disheartening that South Korea with no fewer than 35 million people generated about 60,000 mega watts of electricity.
The President of the Senate, Bukola Saraki, said that the inadequate power supply in the country was affecting economic growth.
He stressed that besides corruption, lack of power supply had plunged the country into further hardship.
“ We thought that with the Power Reform Act and unbundling of the Power Holding Company of Nigeria (PHCN), we will begin to see a relief with regard to power supply but unfortunately it is not so.
“The ad hoc committee we will set up should look at the activities of the DISCOS and what is preventing Nigerians from benefitting from the unbundling of the PHCN,’’ he said.
After the resolution, the senate constituted a 13-member ad hoc committee headed by Sen. Abubakar Kyari (APC-Borno North) to take a look at irregularities in the power sector.
The committee was mandated to carry out a holistic investigation into the management of funds appropriated to the power sector since 1999 and the unbundling of the TCN.
It was directed to conclude its assignment and submit report in two weeks.
Chaired by Abubakar Kiri (Borno North), the committee was given four weeks to submit its report. Olusola Adeyeye (Osun), Dino Melaye (Kogi) and Akpabio are members of the committee.