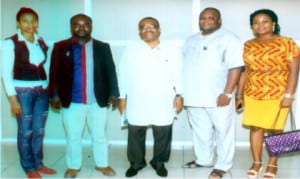 The Permanent Secretary,
Cross River State Ministry of Environment, Barrister Achu Takim Achu, has appealed to the residents of Calabar Municipal Council to cooperate with the waste management disposal housing enumerators presently gathering data for effective waste evacuation and disposal in Calabar.
Speaking in his office, the permanent secretary stated that, “it is not only about the tariff but also to enhance a clean, decent and better way of life,” urging Calabar residents to encourage the government in this venture”.
Takim observed that, despite the fact that Waste Management Agency had used her own staff to enumerate 26,450 houses, he said much needed to be done, hence, the cooperation of all is needed to yield better result.
According to him, “due to the professionalism of the enumerators, the enumeration exercise promises to be fruitful”, adding that, they should be diligent in compiling the data, be proactive in handling any unprecedented challenges encountered in the field and above all, should relate well with the residents. This he said, is a necessity for the success of the exercise.
The General Manager, Waste Management Agency Mr. Elegance Edim, revealed that, the housing enumeration which commenced in Calabar would last for a week, and cover the Calabar metropolis and Calabar South.
In the same vein, , Deputy Director, Climate Change, Ministry of Environment, Dr Ibiang Eteng Ibiang observed that, the exercise might not be without some challenges. He therefore, admonished the enumerators to be polite and should not be confrontational in their manner of approach.
He told the enumerators that they are expected to capture the addresses of all the houses, the occupants, be it a landlord or a tenant, the various types of properties and their usages, be it places of worship’ commercial buildings, hostels, institutions amongst others.
This, he said, would enable them to have the correct data on the volume of the waste being generated from each of the houses for effective management.
Some of the enumerators expressed delight for being able to serve in this capacity, say that they are ready to help the government achieve her set objective on waste management.
One of the enumerators, Mercy Udemadu, Ministry of Justice, stated that, “this would enable the government to generate revenue, keep the environment clean and create a data base of all houses for effective waste management and disposal.
Also speaking, Uren Ikwa of the Ministry of Environment stated that, embarking on this exercise is their own little contribution to ensure that the state government succeeds in this venture.
Residents of Calabar municipality expressed their desire to embrace this new system of waste collection/disposal but appealed that effective mechanism should be put in place to enhance consistency and efficiency of the process, and also build their trust in the system.