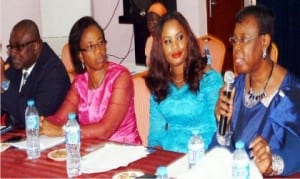 Some stakeholders in the oil and gas industry, last Friday urged the Federal Government to adopt new economic strategies that would boost the nation’s revenue, amid the declining oil receipts.
The energy experts made the appeal in separate interviews with newsmen on the sidelines of the just concluded international conference of the Society of Petroleum Engineers (SPE) held in Lagos.
The Managing Director, Frontier Oil Plc, Mr Thomas Dada, said that the global economic challenges make it imperative for the country to look inwards and tap its indigenous human and material resources.
He said that the inwards search, especially in human capital, would also assist the nation in retaining huge funds lost annually to capital flight.
According to Dada, Nigeria must also look inwards for an effective strategy to maximising its huge petroleum resources earning and utilising it for rapid industrial and economic growth.
He said that the move for increased local content in the petroleum industry was timely and strategic in managing the effects of the dreaded oil price burst, currently threatening activities in the oil and gas sector.
National President, Independent Petroleum Marketers Association of Nigeria (IPMAN), Mr Chinedu Okoronkwo, called for sustained political will in the implementation of the subsisting local content policy.
Okoronkwo said that the local content policy was a won battle for the indigenous players in the industry to accept the challenge of driving the industry.
He said it would save the country from adversities of free fall of crude oil prices in the international market.
The IPMAN boss said that the only way out of the tight oil price curve was for all stakeholders in the industry to foster unity and proffer solutions to bridge the deficits arising from dwindling oil revenue.
He said also that collaboration among local and international players in the industry remains the requirement needed to sustain Nigerian Content Development (NCD).
He pointed out that the indigenous players in the oil and gas industry have escaped the average psychological limits in the country. Okoronkwo explained that the mindset of the industry has developed above the Nigerian psychological template.
Also speaking, Chairman Momas Meter Manufacturing Company (MEMCOL), Mr Kola Balogun, said that the survival of the Nigerian petroleum industry and the success of running policy programmes depend on ability of local service providers to deliver.
Balogun urged government to harness more gas for sustained and rapid industrial growth needed for economic development.
He said that the combination of gas and power form the prime index of country’s economic development and key indicators of standard of living.
“There is a correlation between gas consumption ratio of a country and the nation’s economic development,” he said.
Balogun noted that the current level of gas development in the country remains grossly inadequate in meeting the nation’s economic targets.
“Current total gas production in the country could only deliver 36 gigawatts of electricity.
“There was a critical need for policies that would stop gas re-injection and flaring in order to harness and channel more gas to power generations,” he said.
President, SPE Nigeria Council, Mr Emeka Ene, said that the crude oil price dilemma was a universal concern.
According to Ene, players must face the new reality by adopting cost efficient measures in keeping afloat.
He added that local content remains the only path for the industry through the prevailing market turbulence.
On the domestic environment, he said, gas demand for local industries and power plants has become imperative in the face of the new realities in the industry.
He said that the local content journey has yielded fruits after 13 years’ journey.
Our correspondent reports that the 4-days SPE conference and exhibitions which started on August 3 has “Natural Gas Development and Exploitation in an Emerging Economy Strategies, Infrastructure and Policy Framework,” as its theme.