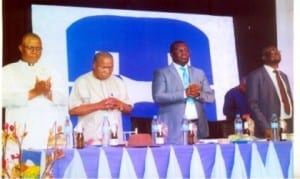 The Rivers State Gover
nor, Chief Nyesom Wike, has rekindled hope of Andoni and Opobo communities over the completion of the Ogoni-Andoni-Opobo Unity Road, as he assured them of delivering the road in one year.
Addressing people of both communities recently after inspecting the condition and extent of work done on the 38-kilometer road, Wike reiterated that he will not fail to keep to his work done on the 38-kilometre road, Wike reiterated that he will not fail to keep his electoral promise by making sure the people drive to their homes next year.
“In one year’s time, you must drive to Opobo. I say so considering our terrain that we have more of rainy season than dry season, but I am not that kind of politician that tells you something and will not do it. I am quite confident that you will drive to Opobo and Andoni by this time next year,” he declared.
He sued for patience as the project was abandoned by the previous administration, saying, “we thought that with the resources we had, that the last administration ought to have completed this project, but unfortunately, it was abandoned”.
Further assuring them of government’s quest to reciprocate the mandate given to it by the people of the area, Wike said, “Whatever it is, and whatever we can do, wherever the money is,
we will go and look for it to make sure that this project is completed”.
The governor pointed out that the project is key to the administration since it will enhance transport and economic activities and provide access to the ancient city centres.
While government goes to source for fund for the project, Wike charged the people to provide conducive environment for the contractor to complete the project.
On their  part, the people of the area thanked Wike for his gesture in ensuring that the road is completed.