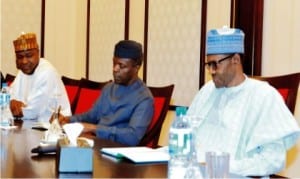 The House of Repre
sentatives has urged the Federal Government to declare a state of emergency in the labour sector to tackle growing unemployment in the country.
The call followed a motion entitled “Urgent Need to Check the High Rate of Unemployment in the Country” which was moved by Rep. Kingsley Chinda (Rivers-PDP) at plenary in Abuja on Wednesday.
The motion was unanimously adopted by members.
The House resolved that its Committee of Labour and Productivity, when constituted, would request for the review of Federal Government’s blueprint on generation of three million jobs per annum.
While stressing on the prevalent rate of unemployment in the country, Chinda said that the problem affected all age brackets.
He, however, said that the youth were most affected by the situation.
“The National Bureau of Statistics in 2011, estimated the number of unemployed persons in Nigeria to be around 24 per cent of the population, and the figure is likely to increase to around 70 per cent by the end of 2015.
“Given the large number of graduates that are churned out yearly from the universities, polytechnics, Colleges of Education, and other tertiary institutions in Nigeria and abroad, the unemployment rate is increasing rapidly.
‘’It can explode by year 2020 if pragmatic steps are not taken to check it,” he said.
The lawmaker said that though the National Directorate of Employment (NDE) was established to tackle unemployment, it had been largely ineffective and unable to fulfil its core objective.
“The prevailing unemployment situation in the country, if left unchecked, will clearly have adverse consequences in the society and will also lead to increase in crime and other anti-social behaviour,” he added.
He pointed out that the country would be at a high risk of unrest and vices which could lead to breakdown of law and order if unemployment was not tackled.
Chinda commended President Muhammadu Buhari for his determination to provide at least three million jobs per annum, and the commitment of the 8th National Assembly to tackle unemployment through legislation.
The house also urged the government to urgently convoke a national summit on unemployment.

NASS, APC And Politics Of Exclusion