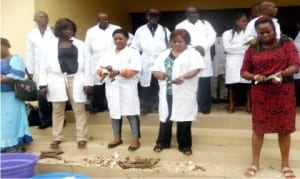 The Rivers State Government
has said that it was partnering with all stakeholders, including the Federal Government and Shell Petroleum Development Company of Nigeria (SPDC) to educate the people at the grassroots on the need to stay away from crude oil theft and illegal refining of hydrocarbon resources because of the dangers such act pose to their lives and the environment.
The Director, Pollution Control, Rivers State Ministry of Environment, Charles George, who disclosed this at Kpite, Tai Local Government Area of the state, last Wednesday, as part of a series of SPDC-sponsored grassroots campaign against crude oil theft and artisanal refining in the Niger Delta, in compliance with the recommendations of the United Nations Environment Programme report on Ogoniland, said that such acts had resulted in the death of many young Nigerians and rendered large part of the precious Niger Delta environment desolate and unproductive.
George, while addressing the more than 1,000 community youth, men and women, at Kpite Community Primary School, said that the Rivers State Government was working assiduously with the Federal Government to revive the Hydrocarbon Pollution Restoration Programme (HYPREP) with the appointment of a new purpose-driven leadership team to fast-track the clean-up of Ogoniland in line with the recommendations of the UNEP report.
He disclosed that once HYPREP management team is reconstituted in a few weeks’ time, physical clean-up of polluted sites in Ogoniland would begin, assuring that the moment the process commences, many jobless Ogonis would be engaged in meaningful and viable employment to enable them support their families and communities.
The director of pollution control warned against continued attempts to undermine the environment through crude oil theft, illegal refining of hydrocarbon resources, pipeline vandalism and destruction of related oil facilities, adding that apart from the criminal nature of the act and its negative impact on the economy, government cannot fold its arm and watch helplessly as the huge death toll and environmental destruction continue to decimate the region, and indeed, the nation.
Senior Environmental Officer, National Oil Spill Detection and Response Agency (NOSDRA), Augustine Bello, warned that crude oil theft and artisanal refining as well as pipeline vandalism are all criminal offences, which attract prison terms, on arrest and prosecution, and appealed to youth involved in the act to desist forthwith in their own interest.
Bello appealed to “the people to allow the crude oil to remain in the pipeline”, because according to him, “if the crude oil is allowed to remain in the pipeline, your farm and fish harvests would be bountiful, and your revenue generation capacity would increase by the day, and you would be able to feed your families, send your children to school, and meet your other needs.”
He noted that the people of the region may not be satisfied with the way oil and gas revenue is distributed amongst the component units of the federation, but stressed that stealing the crude from the pipeline is not an acceptable way of addressing the injustice.
Bello advised the people to work more closely with their political leaders to ensure a new era of legislation that heralds generally-accepted revenue-sharing formula that would provide sufficient funds to address the colossal development challenges facing the region.
In their separate speeches, Gbenemene Twa-Twa Tai, and Paramount Ruler of Kpite, HRH Samuel Nnee and Spokesperson for Twa-Twa Tai Communities, Chief Mission Piwa, restated the dangers associated with crude oil theft and illegal bunkering on the people and the environment, and said that the council of chiefs has been working round the clock to educated the people of Kpite on the need to avoid oil facilities and installations in their farming activities.
They expressed the hope that oil exploration would soon resume in Ogoniland to create avenues for employment of thousands of jobless youth in the communities, emphasizing that most of the youth involved in crude oil theft, illegal bunkering, and pipeline vandaslism were doing so out of the lack of any sustainable source of livelihood to feed their families and make ends meet.