The Rivers State Governor, Chief Nyesom Wike, has stated the resolve of his administration to return the state civil service to its former glory.
He made the assertion shortly after he swore-in the new Head of Service, Barrister Rufus Godwins, yesterday in Government House, Port Harcourt, saying, the new appointment was to chart a new course for the state civil service.
“We are going to inject new blood into the system so that they will be able to work with us to understand our mission and vision”, he said.
Wike charged the new Head of Service to tap into the new Rivers Vision, saying, “you cannot move forward when you don’t understand our mission and our vision.”
The governor, while disclosing that government has cleared the three months’ salary arrears owed civil servants, challenged civil servants on the need to be dedicated and committed to service, assuring that the government will always give attention to their welfare.
He warned that government will not condone indolence, stressing that those who are not willing to key into the mission and vision of the present administration will be shown the way out.
“You need to be part of what we are doing because some of you don’t want to work with the new administration. I cannot move forward when you don’t understand our mission and our vision,” he said.
While tasking the new Head of Service on the need to sanitise the service, Wike said productivity should be the hallmark of the civil service, and urged him to address the deteriorating infrastructure at the state secretariat complex.
He hinted that government will, before the end of the month, release overheads to all ministries and parastatals for the smooth running of all government departments.
In a chat with newsmen, Barrister Rufus Godwins said he will strive to reposition the civil service in line with the vision of the present administration for maximum productivity and to boost the morale of civil servants.
“My responsibility is to lead the team. I am not the boss, but am the leader of the team in the civil service, so, I will get everybody around to play his or her role,” he said.
He, therefore, thanked Governor Wike for finding him worthy to serve and to contribute his quota to the development of the state.
It would be recalled that Godwins was until his new appointment the state Solicitor-General and  Permanent Secretary, Ministry of Justice. 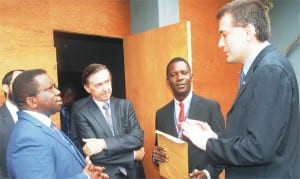