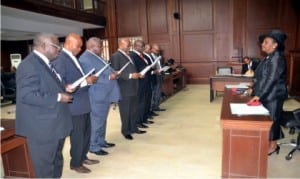 Hundreds of persons were yesterday displaced following a mystrerious fire that gutted a cluster settlements at Amadi-Ama Community in Port Harcourt City Local government Area of Rivers State, destroying properties worth millions of Naira.
Eye witness accounts had it that the fire started at exactly 12 noon, with an explosion which spiralled into a ball of ravaging fire.
Some of the residents of the area, who spoke to The Tide, attributed the mysterious fire to electrical fault, while others described the inferno as an act of sabotage.
The Tide investigation also revealed that the fire may not be unconnected with illegal bunkering activities and sale of Petroleum product within the affected neighbourhood by some criminally-minded persons.
When The Tide visited the scene of the fire, the densely populated settlement, consisting mostly of make shift apartments popularly known as ‘Batcher’, was razed to rubbles.
Crowd of displaced victims milled around their burnt homestead, counting their losses and carrying the little they were able to salvage to safety, but those that had gone out for their various businesses before the fire, had their properties completely burnt.
A victim simply known as Mercy, wept profusely, stating that her entire world had collapsed, as she tried to narrate her ordeal.
Another victim, Otonye Amadi, said no life was lost, but that many lost their entire belongings.
However, it took the intervention of the Rivers State Fire Service to put out the fire, which lasted for about two hours.
Similarly, a mechanic and another make- shift settlement at Elekahia community in the same local government area, had been gutted by fire at the weekend. The Tide gathered that no life was lost in the Elekahia fire incident, but people counted their losses, as the fire, which was linked to electrical fault, burnt over six vehicles and adjoining houses.