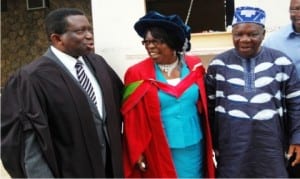 Vice Chancellor of the Uni
versity of Port Harcourt, Prof Joseph Ajienka says the major challenge hampering development in government owned tertiary institutions is lack of adequate and consistent funding.
The vice chancellor, who stated this while fielding questions from newsmen at the Rivers State University of Science and Technology (RSUST), recently, noted that government alone cannot effectively fund higher education in Nigeria.
Ajienka further suggested special loan facility for indigent students alongside involving the private sector to complement the efforts of government in the country.
“For sustainable development of our public higher institutions, we offer the following well-thought our suggestions.
“Government should convert current subventions given to universities into loans for indigent students, while those who can afford pay fees.
“A carefully implemented loans be worked out right from the period of National Youth Service Corpe (NYSC)”, he said.
Professor Ajienka continued that “unless we secure sustainable funding of our higher educational instutions, we are only post- poning the demise of the public higher educational sector.
He noted major developments recorded under his stewardship of the university, which will come to an end soon, when the 8th VC of the school, Professor Ndowa Ekoate Sunday Lale, will assume office.
Such development include accreditation of all programmes presented for National Universities Commission (NUC) accreditation, and the receipt of four patents from ground breaking research.
The university, according to Professor Ajienka, recorded numerous developments in the 2014/2015 session in which the Senate of the university approve various programmes.
They include Graduate Studies, Professional, undergraduate programmes, Part Time, Research and Development, Research Grants, and Research Fellowship.
Others are Research Collaboration, Libraries and Museum, New Institutes, and Laboratories, Conferences, Workshops and Seminars as well as major public lectures.