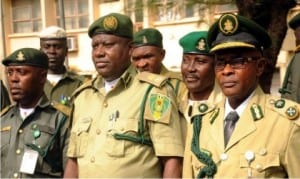 The Tertiary Education
Trust Fund (TETFUND) says that it would invest N180 million in the “Boy Child Education” programme at the Federal Polytechnic Oko, Anambra State.
Mr Chinedu Onu, a Board of Trustees (BoT) member of the fund, made this known when members of TETFUND paid a courtesy visit to the Rector, Prof. Godwin Onu.
Onu said that TETFUND had already allocated the money to develop skill acquisition centres in the polytechnic and that the pupose of the visit was to inspect site for the project.
He said that the programme was aimed at creating opportunities for male children who were not opportuned to continue their education because of the rigorous process of gaining admission.
He said that the programme would ensure the assemblage of all interested skilled youths who are either carpenters, mechanics, bricklayers or hair dressers and traders, to improve on their skills and knowledge in their chosen careers.
Onu said that five tertiary institutions in the South-East had been chosen for the programme, adding that the pilot scheme starting at Oko Polytechnic, was expected to be run by the private sector.
Responding, the rector said that engaging the youths through such programmes would curb crimes such as armed robbery, kidnapping, and cultism, among others.
He said that the programme would also ensure lasting peace in the society as the youths would be gainfully employed or be employers of labour upon graduating from the programme.
According to him, the aim of the programme is to produce graduates who will acquire skills upon graduation, to better themselves and not clustering the labour market.
Onu described TETFUND as the best thing that had happened to tertiary education in the country.
He said that without the fund, tertiary institutions would lag behind in terms of classrooms, offices, laboratories, among other facilities.
He commended TETFUND for initiating activities aimed at improving academic standard in the country and assured the team that the polytechnic would continue to utilise every fund it received judiciously and maximally.
He said that the polytechnic would be transformed as no fewer than 21 buildings were being constructed up in different locations with the intervention fund of about N1billion received from TETFUND.
Dr Azubike Odukwe, the Chairman, Governing Council of the institution, gave an assurance that the school would witness more development.