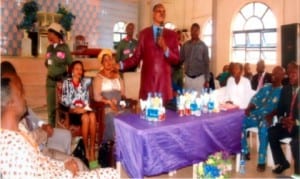 The 2013 batch of beneficiaries of the Rivers State Sustainable Development Agency (RSSDA) Overseas scholarship scheme yesterday besieged the main entrance of the Rivers State Government House, Port Harcourt, protesting their abandonment by the RSSDA after being selected for the scholarship.
Directing their complaints to the Chief of Staff, Government House, Port Harcourt, Hon. Emeka Woke, the placard-carrying protesters, said they were in Government House to appeal to the Rivers State Governor, Chief Nyesom Wike to come to their aid and alleviate their plight.
The protesters said they had remained at home since 2013 with their brains left dormant and begged the Rivers State governor to reactivate the scholarship programme to enable them travel for the scholarship programme.
Speaking through one of the beneficiaries, the protesters said, “we have written several letters to the last administration, but we did not get any positive response, they told us there is no money, we have remained in the house for two years, we want the new governor to come to our aids”.
In his response, the Chief of Staff, Government House, Port Harcourt, Hon. Emeka Woke, thanked the students for their resilience and peaceful conduct, stating that the present administration was aware of their plight and those of other students already overseas.
Woke said he would take their complaints to the governor, and pointed out that the governor had already scheduled a meeting with the management of RSSDA to address the issues.
The Chief of Staff also assured that the governor has serious concern for educational development of Rivers youth and will not jeopardize the future of youth.
Also speaking, one of the parents of the students, Chief Hycinth Oluo appealed to the Rivers State governor to assist the students in actualizing their educational dreams.
He added that the students’ inactivity placed them at the risk of mental retardation, and urged the government to intervene quickly and ensure that the students were sent to the schools they had been slated to study abroad to secure their future.

Rivers: ‘We Will Not Politicise Security, Dev’