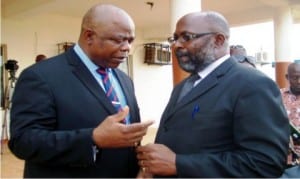 Ebonyi State
Commander of the National Drug Law Enforcement Agency (NDLEA), Mr Raph Igwenagu, says the agency has arrested 85 suspects for drug related offences in the first half of 2015.
Igwenagu made this known in Abakaliki at a forum to commemorate the 2015 International Day against Drug Abuse and Illicit Drug Trafficking.
He said 75 males and 10 females were arrested while 55 kilogrammes of drugs were seized from the suspects.
“The command also secured the conviction of 25 suspects while 35 drug users were counselled and discharged and three drug dependent persons are still undergoing rehabilitation’’, he said.
According to him, drug abuse does not only influence anti-social behaviour, it is a major predisposing factor for all forms of crimes and criminalities such as youth restiveness, armed robbery, cultism, assassination, among others.
The commander held that youth’s involvement in drug abuse had brought about unprecedented breakdown in societal and family values, increase in school dropouts, low productivity and the spread of HIV and AIDS.
He called on Nigerians to join hands in the effort to critically appraise the menace of drug challenges in the society and to evolve means to eradicate its inherent dangers to the country.
“This programme serves as a veritable platform for the agency to critically appraise its activities in the better part of the year as well as provide the compass necessary to chart a way forward”, he said.
The Commissioner of police in the state, Mr Dikko Maigari, cautioned Nigerian youths against involvement in drug abuse in view of its damaging effect on the body and the society.
He warned that the long arms of the law would always catch up with those who are involved in drug abuse and illicit drug trafficking.
Other speakers on the occasion were, Mrs Bibian Okpoko, Comptroller of Prisons, Ebonyi State,Mr Magnus Eze, Coordinator, Okposi Development Center and Mr Richard Anichukwu, state Coordinator, NAFDAC.
The Theme of the celebration is Let’s Develop Our Lives,Our Communities,Our Identies Without Drugs.