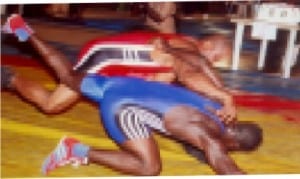 Wrestlers in contest in a past national competition

Rivers State capital, Port
Harcourt has been chosen by the Nigeria Football Federation, NFF, to host the first leg tie of the 2016 Olympic Games qualifying fixture between Nigeria and Equatorial Guinea which will come up on July 18, and the Africa Under -23 championship final round first leg match between Nigerian’s U-23 team, Dream Team VI and their Congolese counterparts on July 19,2015.
Already, Tidesports has learnt that in a bid to ensure successful hosting of the national teams, the Rivers State govenernment is scheduled to inaugurate teams matches in the city.
The 11-man committee has former Commissioner for Sports, Hon Boma Iyaye as chairman and the Permanent Secretary, Ministry of Sports as Secretary.
Members of the committee include Chief Adokiye Amiesimaka (MON), ex-player, Albert Chinwo, ex-internationals, Mercy Akide-Udoh and Eddy Mark. Others include, Nigeria Football Federation Chairman, Rivers SWAN Chairman, Special Adviser to the Governor on Media and publicity, Opunabo Inko-Tariah, and representatives of the police and State Security Services, respectively.
Following the withdrawal of Mali in the second round the Super Falcons now have two rounds of qualifying fixture to prosecute before qualification.
Qualification will see them in the Women’s Football Tournament of next year’s Olympics  in Rio de Janeiro, Brazil.
The Nigerian girls have played at three previous Olympics – 2000,2004 and 2008.
The winner of the Dream Team / Congo fixture qualifiers for the African U-23 Championship coming up in Senegal in December.
The best three of the eight participating teams will be eligible to represent Africa at the Men’s Football Tournament of next year’s Olympic.
The fourth-placed team in Senegal will play-off against a team from Asia. Meanwhile, the NFF General Secretary, Mohammed Sanusi has said that henceforth, the federation would decides international match venues well in advance. “This is in order to afford host cities enough time to work on the facilities to be used for such matches”, the General Secretary was quoted saying.
In line with the new policy, the Ahmadu Bello Stadium in Kaduna will host the 2017 Africa Cup of Nations (AFCON) qualifying match between the Super Eagles and the Pharaohs of Egypt.
The (NFF) said the match is scheduled for Wednesday, March 23, 2016.
It however said officials have also confirmed that work would be undertaken on the stadium’s pitch, and a couple of other areas which need to be improved before the match.
Nigeria and Egypt share top spot on the Group G table of the qualifiers, with the Pharaohs ahead on a one-goal advantage.
They had whipped Tanzania’s Taifa Stars 3-0 in Cairo in penultimate weekend’s opening matches, a day after the Super Eagles beat Chad 2-0 in Kaduna.
The Eagles’ next match in the series is away to Tanzania in the first week of September, before the visit to the Pharaohs two weeks later.
Egypt has missed all last three AFCON finals, including the 2013 finals which Nigeria won in South Africa.