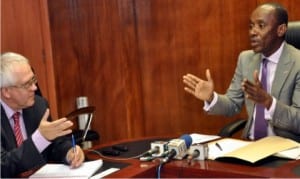 Leader of delegation, European Union Consultants on Energy, Peter Cameron (left), and the NERC Chairman, Dr Sam Amadi, during a meeting with the delegation in Abuja, yesterday