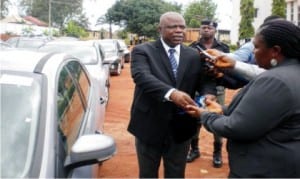 Chief Judge of Anambra State, Justice Peter Umeadi (Left), presenting a car key to the Chief Registrar, State Judiciary, Mrs Doris Ezeani, symbolising the presentation of cars to 20 newly appointed magistrates and two other staff of the State judiciary in Awka on Monday

An ex-employee of Delta
State, Hospital Management Board (HMB), Dr Michael Gbamgbo, has revealed how he was issued  no fewer than 15 queries that led to his dismissal.
Gbamgbo disclosed this last Thursday under cross-examination at the National Industrial Court (NIC) in Enugu.
He said that the queries were  as a result of the malice harboured against him by the Permanent Secretary of the State Ministry of Health whom he identified as “Dr. Ofili.”
Gbamgbo said that he never received any warning letter based on the queries given him, particularly that of June 24, 2009 before the termination of his appointment.
“All the queries I received were not given to me by one person and the answers were satisfactory and that was why I was not given any warning letter.”
The Counsel to HMB and Ofili, Mr M. Omakor, had told the court that Gbamgbo had a very bad record of service while in the ministry.
Omakor said that the queries issued to the claimant in the suit were meant to correct his bad attitude to work.
In a related development, one Mr Jacob Ene of 9 Otitu street, Sapele has dragged the Immigrations and Prisons Service Board to the NIC, Enugu for unlawful termination of his appointment with the Nigeria Immigration Service.
When the matter was called up for hearing, the counsel to the claimant, Mrs Chinyere Ifediora, told the court that the dismissal was not done in line with the civil service rules.
Ifediora said that Civil Service Rule 04107 provided for procedures for the dismissal of a civil servant, adding that such was not followed.
“This suit is primarily against Immigration and Prison Service Board that approved the dismissal of my client.
“The dismissal of my client on September 5, 2011 was not done in accordance with extant rules of the civil service.”
Ifediora sought the leave of the court to declare the dismissal null and void and for his immediate and unconditional re-instatement with full benefits paid from the date of dismissal.
The matter has been adjourned to October 13, for continuation of hearing.
In another development, a Federal High Court in Enugu has restrained Amagu Umuluokpa in Ezeagu Local Government Area in Enugu State from conducting election into its town union.
This followed a motion on notice brought by Mr Fabian Okafor and Chief Charles Chukwuma against the President of the union, Mr Raphael Mosanya.
The counsel to the plaintiffs, Mr Boniface Ugwu, had on December 11, 2014 asked the court to stop the respondents or their agents or group from conducting any election or meeting in the town union office.
He told the court that the order also sought to stop Mosanya from parading himself as the president general of the town union pending the determination of the suit.
The presiding judge, Justice Dorothy Agishi, adjourned the case to July 2 for further hearing.