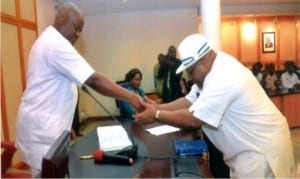 Indigenes of 254 Ijaw communities from Bayelsa State at the weekend protested against the ruling of the Court of Appeal in Port Harcourt, the Rivers State capital, which struck out the $1.5billion oil spillage and environmental degradation case against oil giant, Shell Petroleum Development Company of Nigeria (SPDC).
The group lamented that the judges, who handled the case, did not bother to give consideration to the plight of the local people whose environment, they said, had been devastated by oil exploration and its attendant spillage.
An Ijaw leader and spokesman, Chief Pere Ajuwa at a media briefing to drum home the protest on the judgement, alleged that the judges were allegedly compromised by Shell to deliver a favourable judgement for them despite the overwhelming and convincing evidence of death, oil spillages and environmental pollution.
Ajuwa, a former presidential aspirant in the aborted Second Republic, noted that the Ijaw nation has been in a violence-free battle with Shell over the deaths and other hazards the company has caused them, adding that the Ijaw communities have prepared a petition to the National Judicial Council (NJC) against the judges.
Noting that the matter had appeared before the two chambers of the National Assembly, which he noted, ordered Shell to pay $1.5billion to the 145 Ijaw communities in Bayelsa State, Ajuwa said Shell preferred to use its money to pollute the Nigerian judiciary system, alleging that it bought over the Federal Court of Appeal judges to deliver the judgment that was to their favour.
“We have been in a battle with Shell Petroleum Development Company of Nigeria. When the traditional rulers council of Bayelsa State invited me to handle the case, I gave them my conditions, which included non-violence from any Ijaw group. In 2003, a commission of inquiry was called at the National Assembly and there has not been any single violence against Shell since that period till now.
“But in this process, we have been undermined even by certain agents of government and Shell. The commission of inquiry specified that 1,247 indigenes of Bayelsa State died due to Shell’s oil pollution. There was an unmitigated outbreak of cholera and other water-borne diseases. This figure was confirmed by both NNPC and the Federal Ministry of Petroleum Resources.
“The National Assembly proclaimed that Shell was guilty of environmental degradation that led to death of people, Shell was asked to pay the 145 Ijaw communities in Bayelsa the sum of $1.5billion, but Shell went through the courts and said that the National Assembly cannot give a legislative judgment or award such amount of money to the Ijaw nation.
“When we went to the Federal High Court, it ruled in our favour, noting that if two parties agree to submit themselves to a non-judicial body, any decision taken by the body should stand. It, therefore, upheld that Shell should pay us the stated amount.
“But Shell took us to the Court of Appeal, where they had their judges who struck out the decision of the lower court despite the convincing and overwhelming evidence of oil spillages, degradation and deaths which Shell activities in Bayelsa has brought to us. In striking out our case, the Appeal Court said that we are abusing court process.
“This decision will not stand because we have already prepared our petition to the National Judicial Council (NJC) to sanction those judges. Nigerian judges have always been role models in countries like Uganda, Gambia and Sierra Leone, but just a few bad eggs in the system have allowed themselves to be used by the likes of Shell to upturn justice even in the face of convincing and overwhelming evidence”, Ajuwa lamented.