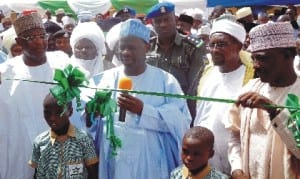 Alhaji Kabiru Mijinyawa (APC-Yola South) has emerged
as the Speaker, of  the  Adamawa State House of Assembly.
Mijinyawa, nominated by Abdulrahman Abubakar (APC-Mubi South), polled 17 votes, while his opponent, Alhaji Rufai Umar (APC- Gombi), who was nominated by Mallam Hammanjoda Umar (APC-Jada/Mbulo), scored eight votes.
Mr Sunday Peter (APC- Guyuk), was elected unopposed as Deputy Speaker following non-secondment of Mrs Sodomti Tayedi (APC- Numan), who was nominated to contest the position with him.
Addressing the House after taking oath of office, Mijinyawa thanked members of the Assembly for electing him as speaker.
Mijinyawa, therefore, urged members to support him to move the state forward.

The Borno State chapter of the Trade Union Congress
(TUC) last Monday urged Governor Kashim Shettima to redeem his pledge of employing 500 people into the state civil service.
Alhaji Ali Grema, the TUC Chairman in the state, told  newsmen in Maiduguri that priority should be given to youth empowerment and the security challenges in the state.
He advised the government to rehabilitate its industries to create employment opportunities for the youth in the state.
“We have industries that can generate up to 300,000 jobs for the youth.
“That is why we are calling on the state government to focus on reviving the industries like Borno State Hotel, Neital Shoe Company and Borno Investment Company,” he said.

A 40-year-old man, Banji Adebayo, charged with con
spiracy and armed robbery, has been remanded in Olokuta Prison by an Akure Chief Magistrates’ Court.
The accused, with others still at large, were alleged to have robbed one Mr Afolabi Adeniyi, of different types of cell phones, cash, laptop and other items, all valued at N4.98 million.
The Magistrate, Mr Sunday Adedapo, ordered the remand of the accused in prison custody pending the receipt of legal advice from the state’s Director of Public Prosecution.
Earlier, the prosecutor, ASP Pelumi Adejuwon, had told the court that the accused person, armed with dangerous weapons , robbed the victim of different types of cell phones, valued at N1 million.
Adejuwon also said that the accused snatched MTN, GLO, Airtel and Etisalat recharge cards, valued at N1 million; Acer laptop valued at N53,000 and N825,000 cash.

Female beneficiaries of the National Directorate of Em
ployment (NDE) in Jigawa State have commended the agency for its skills acquisition training for women.
The beneficiaries made the commendation in an interview with newsmen  in Dutse.
One of the beneficiaries who gave her name as Fadila Muhammad, said the gesture would help the women to be self-reliant.
She added that it would also reduce the level of dependence by wives on their husbands.
Another beneficiary, Hafsat Garba, said: “We thank God and NDE for this training.”

Governor Nasiru El-Rufai of Kaduna State has reduced
the number of ministries in the state from 19 to 13 for effective service delivery.
The information is contained in a statement issued by Samuel Aruwan, the Special Assistant (Media and Publicity), to the governor in Kaduna last Tuesday.
The statement which said that the governor also reduced the number of commissioners to be appointed to 13, noted that the development was in continuation of El-Rufa’I’s efforts to cut the cost of governance in the state.
“El-Rufai decided to reduce the number of commissioners to only 13 as against the 24 appointed by the immediate past administration.
The governor will also limit the number of aides that the 13 commissioners will recruit to support them in the discharge of their duties,” it said.
Kano

The Kano State chapter of the Federation of Muslim
Women Association of Nigeria (FOMWAN) has appealed to leaders at all levels to assist the needy as part of service to humanity.
The FOMWAN Chairperson in Kano State, Hajiya Sa’adatu Hashim, made the call during a one-day seminar it organised with the theme “Service to Humanity (Path to Aljannat)” in Kano last Monday.
Hashim said the call was to alleviate the sufferings of the less-privileged in the society, pointing out that “anybody who assists the poor will be replenished by Allah.
The chairperson then urged women to register with the organisation with a view to rendering service to humanity.
She said the Association has branches in all the 44 local government areas of the state, stressing that its activities centred on the propagation of Islam.

Lagos
Justice Ibrahim Buba of a Federal High Court in Lagos
last Tuesday dismissed the suit seeking to vacate Assistant Inspector General of Police (AIG) Mbu Joseph Mbu over his alleged abuse of power.
In his ruling, Buba said no court in Nigeria could declare the office of a police officer of the rank of AIG vacant, saying that such action was the responsibility of the Nigeria Police.
“If any threat is made against any person, it is the duty of the police to investigate and punish the officer who made it accordingly, even if it is an AIG.
“No court in Nigeria can declare the office of such officer vacant; it is the duty of the police, “he said.
Buda said that the case of the plaintiff had no merit and was therefore dismissed.

The Federal Medical Centre (FMC), Keffi, Nasarawa
State, said last Monday that it has entered into partnership with the Keffi Local Government Council to tackle health challenges of rural populace.
Dr Joshua Giyan, FMC Medical Director, made the disclosure in Keffi when Alhaji Mohammed Dikko, the council Chairman, visited the centre.
Dikko was represented by his vice, Mr Joseph Maiwada.
Giyan said that the collaboration was to tackle the health challenges of the rural dwellers and to ensure quality healthcare service at the grassroots.
Giyan restated the commitment of the centre to continue to initiate policies that would improve on the welfare of its staff and people of the state.gun

Ogun
No fewer than 500 persons benefitted annual free eye
surgery jointly organised by Ogun State Government, Indo Eye Care Foundation and Rotary International.
The Permanent Secretary, state Hospitals Management Board, Mrs Modupe Olurin, made this known at the General Hospital, Abeokuta.
She explained that the event was aimed at giving succour to indigent citizens of the state who were victims of cataract and could not afford the cost of the operation.

Members of the Judiciary Staff Union of Nigeria
(JUSUN), Osun State Chapter, have refused to resume work after State Chairman, Mr Dapo Oseni, called-off the five-month old strike last Monday.
sources said that  magistrate and customary courts in Ile-Ife remained closed last Tuesday.
Oseni had directed the workers to go back to work, as Governor Rauf Aregbesola had pledged to pay JUSUN and other workers their salaries.
But the workers insisted that they would not resume duty until their salaries were paid.
A senior staff, Mrs Yemi Owolabi, who spoke with newsmen confirmed that they could not resume work while being owed seven months salary arrears.
“The ongoing strike by the members would not be called off until last penny of our salaries is paid,” she said.
JUSUN began their strike on January 5, to compel the government to obey a court order that affirmed financial autonomy of states’ judiciary.

Plateau
The Catholic Bishop of Pankshin Diocese in Plateau
State, Most Rev. Michael Gokum, has donated items worth over N2.5 million to Internally Displaced Persons (IDPs) taking refuge in Pankshin and nearby areas.
The donation was made through the Justice Development and Peace Commission (JDPC) of the diocese and was supported by the Catholic Caritas Commission.
The main beneficiaries of the gesture were persons displaced from the North-East and are taking refuge in Kanem and Kanke local government areas of the state.
He also said that the gesture  which was for all Christians was a show of love, concern and to identify with the IDPs.
The Archbishop assured the IPDs that their stay at the various camps was temporary as government was intensifying efforts to ensure that peace returned to their original abodes.

Taraba
Governor Darius Ishaku of Taraba State has approved
N8.5 million for the overhaul of the Jalingo water plant to ensure potable water supply in the metropolis.
Mr Sylvanus Giwa, the Senior Special Assistant to the Governor on Media and Publicity, made this known in a statement made available to newsmen in Jalingo on Tuesday.
According to the statement, the governor had mandated the Taraba Water Supply Agency to immediately commence work on all faulty water pipes in the capital.
“The governor’s concern is informed by the acute water scarcity in the town, which has forced residents to find alternatives in unsafe water sources that are hazardous to community health, it said.
The statement urged all officials responsible for carrying out the project to be diligent, adding that government would not tolerate any form of laxity.
It further stated that government was committed to providing essential services to the people of the state in the months ahead.