In a statement, yesterday, Senior Special Assistant to the President, Media & Publicity, Garba Shehu, indicated that in the course of the visit, Buhari will participate in the G-7 Outreach programme for invited heads of government and global institutions.

Buhari, who was received on arrival by the Vice Minister-President of Bavaria, Mrs. Inge Aigner, was accompanied by Governor Kashim Shettima of Borno State, former Governor Babatunde Fashola, Gen. A. Dambazau (rtd) and the Permanent Secretary of the Ministry of Foreign Affairs, Amb. Paul B. Lolo.

Other invited Heads of State and international institutions who will join Buhari at the working session with G-7 leaders today at Elmau, include President Jacob Zuma of South Africa, President Ellen Johnson-Sirleaf of Liberia, President Macky Sall of Senegal, President Beji Caid Essebsi of Tunisia and Prime Minister Hailemariam Desalegn of Ethiopia.

Before leaving Munich for home tomorrow, President Buhari will hold bilateral talks with the Chancellor Angela Merkel of Germany and Prime Minister Stephen Harper of Canada on the sidelines of the G-7 Outreach Programme.

He is also expected to meet US President Barack Obama, French President Francois Hollande, British Prime Minister David Cameron, and other G-7 leaders in the course of the outreach session and a working lunch at the Elmau Castle.

The Head of the Bavarian regional government last night hosted a dinner in honour of President Buhari and other leaders invited to the G-7 Outreach Programme. 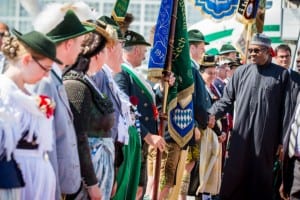 President Muhammadu Buhari (right), inspecting a guard of honour on his arrival in Germany, yesterday