Rivers State Governor, Chief Nyesom Wike has directed Permanent Secretaries in the State Civil Service to provide the account of their Ministries in the past 18 months, warning that “I will not accept any handover notes without the account statements”.
He also charged Permanent Secretaries in the various Ministries to be apolitical while assuring that he did not come to witch-hunt anybody.
The governor gave the warning at a meeting with Permanent Secretaries in the employment of Rivers State Government in Government House, Port Harcourt, yesterday, against the backdrop of reports of last minute financial transactions and allocations.
The governor said that, “for those who want to work, be assured that I will give you the necessary support, and those who want to play politics, we will play politics with you also.”
He reminded them that as civil servants, they are not supposed to be political but ensure that government policies and programmes were implemented.
He, therefore, urged them to support his administration, as he condemned the action of some of them who deliberately worked to frustrate the transition committee in providing necessary vital information for the incoming government to work with.
According to him, most of the information so far provided is muddled, as he urged them to go back and provide necessary details as accounting officers of their ministries.
While promising that he will set a fresh pace in governance, Wike emphasized that he will stick to his promises by working to fulfill them, adding that, “we will set agenda, and we will work in line with the agenda, and so, we require your cooperation for the state to move forward.”
Wike lamented the state of affairs in the state due to politisization of the state civil service and pursuit of personal interests above state interest.
He warned that his administration will not condone any act by the permanent secretaries to sabotage the administration, and urged them to work as civil servants to deliver service to the people.
Meanwhile, Rivers State Governor, Chief Nyesom Wike yesterday ordered banks and other financial institutions not to grant loans to local governments, ministries or parastatals in the state without his consent.
A spokesman for the governor, Mr Opunabo Inko-Tariah, said in a statement in Port Harcourt, that the governor warned that any bank or financial institution that went ahead to grant loans, would be doing so at their own risk.
“Anybody, person or institution that grants loans to local government councils, ministries or parastatals without his express and written approval, does so at their own risk.
“The public is hereby warned and financial institutions are also warned not to approve loans without his consent,’’ it said.
The statement said the order was with immediate effect. 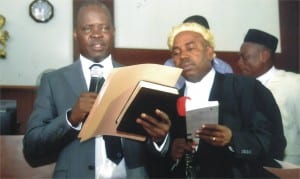 The new Speaker of the Rivers State House of Assembly, Rt Hon Ikuinyi-Owaji Ibani (left), taking his oath of office, at the Assembly complex in Port Harcourt on Monday