A group of unknown gunmen has kidnapped the mem
ber representing Toungo Counstituency in the Adamawa  State House of Assembly, Alhaji Adamu Usman.
Usman was said to be kidnapped by the gunmen who stormed his residence at Kofare Ward of Yola around midnight.
Confirming the incident, the Police Public Relations Officer, Adamawa Police Command, Mr Othman Abubakar, said the lawmaker was taken away at gunpoint.
He however said that the police were investigating the incident.

Arewa Youths and Women Coalition for Good Gover
nance (AYWCGG), a Bauchi-based non-governmental organization, has called on the leadership of the All Progressives Congress (APC), to be fair to all in their zoning formula.
The North East Coordinator of the group, Alhaji Aminu Sidi, made the call at a press conference in Bauchi.
Sidi said that Nigerians had entrusted the future of the country in the hands of APC because of their belief that the party would help restore the country’s lost glory.
He called on the leadership of the party, to be fair, just and carry every geo-political zone along in its power sharing formula, to reflect the aspiration of Nigerians, who voted APC as the nation’s ruling party.

The Federal Government has agreed to go into partner
ship with the Institute for Cultural Diplomacy (ICD) in its Youth Education Development project.
The Country Representative of the institute, Mr Dickson Omoregie, made the disclosure in a statement issued recently in Abuja.
The Education and Youth Development Department of the Federal Ministry of Youth Development is expected to host ICD in its Youth Education Development project.
The project will be domiciled in the youth ministry because of government partnership, to gain accessibility and easy dissemination of information, Omoregie stated.

The National Emergency Management Agency (NEMA)
has presented relief materials to over 1,000 individuals and organisations affected by bomb blasts, insurgency attacks and fire disasters in Gombe State, recently.
Our correspondent learnt that the affected groups comprised those affected by the bomb blast at Dukku motor park and fire disaster in some areas of Gombe metropolis and Billiri town.
Others are victims of insurgency attacks in Gombe metropolis, Dadin Kowa, Hinna and Kwadon towns of Yamaltu/Deba Local Government Area of the state.
Speaking during the presentation ceremony in Gombe the Head of Operations, NEMA, Gombe, Alhaji Ahmed Minin, said the materials were to serve as succour and not compensation to the victims.

A chieftain of the All Progressives Congress (APC) in
Jigawa State, Alhaji Ubali Hashim,  has called on the Federal Government to complete the Hadejia Valley project to encourage agricultural activities in the area.
Hashim told newsmen in Hadejia, Jigawa State, that the call was imperative in order to mobilise participation in agriculture, accelerate paddy rice production and reduce poverty in the country.
He said that the project would open up lands for irrigation farming in Jigawa, Kano, Bauchi, Yobe and Borno states.
He added that more than one million farmers in Jigawa could be engaged when the project was completed as it would immensely contribute to sustainable socio-economic development of the state.
The APC leader also advised the new administration in the state to utilise the agriculture and water resources to address the problem of unemployment among youths.

Legal Aid Council of Nigeria, has solicited the assis
tance of the Federal Government and other stakeholders for funds to support the less privileged in need of legal services.
The Director-General of the Council, Mrs Joy Bobmanuel, made the appeal on Friday in Kaduna in an interview with newsmen.
The Legal Aid Council was set up to assist the less privileged who could not afford legal services in courts.
Bobmanuel said the council was constraint by inadequate funding from both the federal government and international donors.
She said that additional funding would help the council assist more persons in need of its services.

Women in three rural communities in Kwara State would
be sponsored under a girl education programme by the Centre for Community Empowerment and Poverty Eradication, an NGO.
The Chief Executive Officer of the centre, Alhaji Sulaiman Kareem, disclosed this recently in Tunga Maje, Kaiama local government area of the state at a community dialogue.
The forum was convened to chart a new course on ways to improve girls’ education in rural communities, he said.
Kareem noted that the NGO, a partner of Actionaid Nigeria, was working in three communities of Tenebo, Tunga Maje and Gatte because of the decline in girls’ enrollment in schools in the area.
According to him, the centre will set up business for the women and proceeds from it would be spent on sponsorship of girls’ education alone.

The Librarian, National Open University of Nigeria
(NOUN), Dr Ukoha Igwe, has called on librarians in schools across the country to step up efforts in sustaining school libraries.
Ukoha made the call at the close of the week long Nigeria International Book Fair, held in Lagos.
According to him, the libraries remain the power house of knowledge, adding that without them, there will be no innovation.
He said that librarians must be able to develop their capacities to improve on library services.
The NOUN librarian said that for librarians to remain relevant, they must ensure that they train and retrain, to be at par with new technologies and other developing trends.
Ukoha said that libraries should be torchbearers that must constantly provide light for people to come out of darkness.
He said that the failure of libraries to provide light for people would promote conflicts among the young people in the society.
Nasarawa

The Federal Medical Centre (FMC), Keffi, Nasarawa
State, has commenced the digitisation of keeping information relating to patients.
The Medical Director of the centre, Dr Joshua Giyan, stated this during the inauguration of the new technology at the information management unit of the centre in Keffi.
He said that the move was part of the centre’s commitment to ensure that patients’ information were kept safe as well as to ensure quality service delivery for the benefit of all.
“The aims and objectives of this new technology are to ensure that patients’ information is kept for a longer period without entertaining any fear.
“The new device will help to curb cases of misinformation about patients’ details,” he said.
He said that all modalities had been put in place for proper maintenance of the new device, to ensure its durability.

The Vice-Chancellor, University of Ibadan(UI), Prof. Isaac
Adewole, says in Ibadan, that the institution would partner Galilee Institute of Management, Israel, in the areas of research development.
He said that the two institutions would sign a Memorandum of Understanding (MOU)that would include modalities to deepen? research in technology and health.
Adewole, who spoke at the ?64th Interdisciplinary Discourse of the Postgraduate School, decried under-funding of research in Nigeria.
The vice-chancellor said that Nigeria cannot compete globally without strengthening research.
“The successes recorded in Israel are a pointer to the fact that only Nigerians can turn around positively the fortunes of Nigeria with determination and commitment” he said.
He urged the incoming administration to invest in research, and properly fund tertiary institutions in order to place Nigeria tops among the comity of nations.

The Nigeria Red Cross Society has distributed relief ma
terials to 3,000 Internally Displaced Persons (IDPs) in Yobe  State under the Presidential Initiative for the North-East zone.
Red Cross Distribution Officer for Yobe, Malam Kabir Umar, disclosed this in an interview with newsmen in Damaturu.
“Under this Programme, we have carefully screened 3,000 genuine victims of insurgency to benefit from the package.
“The beneficiaries who are taking refuge in Damaturu, Potiskum, Fika and Geidam were screened and authenticated by leaders of the affected communities.
“The society is working in partnership with the State Emergency Management Agency (SEMA) for easy location and identification of the victims to benefit from the programme,” Umar said. 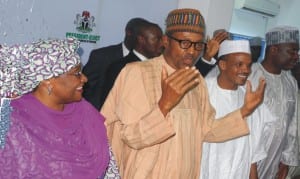