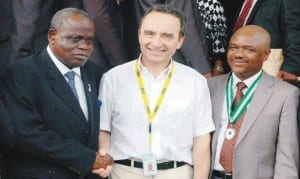 All is now set for the Rivers State Council of Nigeria Union of Journalists’ (NUJ), Sixth Triennial Delegates Conference holding tomorrow at the Ministry of Justice Auditorium, State Secretariat Complex, Port Harcourt.
In an emergency congress meeting yesterday at The Tide Temporary Secretariat of the union, members put paid to speculations that the elections scheduled for Thursday had been postponed.
The credentials committee, under the Chairmanship of Dr. Alpheaus Paul-Worika, released the final list of cleared candidates to contest the elections as well as eligible voters as certified by the national secretariat, and signed by Senior Assistant National Secretary, Gbemiga Bamidele.
According to the final list of cleared candidates published yesterday, Mr. Stanley Job Stanley, Mr. Lilybox Imikubi and Mr. Omoni Ayo-Tamuno have been cleared as qualified to contest for the position of Chairman while Mr. Obed Omah was disqualified for incompetence due to contravention of Article 6,7 (b) and (e) of the NUJ constitution.
Those certified healthy to contest for Vice Chairmanship position are Clarice Azuatalam, Jim Udede-Opiki and Uche Agbam while Tonye Orabere and Soibi Max-Alalibo were declared competent to compete for the position of Secretary.
Other positions are Assistant Secretary, Anayo Onukwugha was returned unopposed, Priscillia Okere, the Sole candidate for the position of Treasurer was also returned elected while Barth Ndubuwah (Financial Secretary) and Anya Godpower Lekia are returned unopposed for lack of any opposition.
The document conveying the final list of cleared candidates from the NUJ national Secretariat, Abuja, and signed by Senior Assistant National Secretary, Mr. Gbemiga Bamidele further indicated that RIVCAS, IIJ and Uniport Chapels are associate members, and must be accorded such rights and privileges due them as stipulated in the constitution of the union.
The national office urged members to be guided by Article 3, 2 (a) (b) and 3: 3(a) (b) that deals explicitly on membership of the union while advising members to be peaceful and orderly before, during and after the elections.
Meanwhile, the State NUJ Chairman, Mr. Opaka Dokubo, has resigned his position to enable him contest the forthcoming National elections of the union scheduled for July 25-26 as Zonal Secretary.
At the emergency congress meeting yesterday, members unanimously adopted Opaka Dokubo as their sole candidate for the position of Zonal Secretary, and commended him for his sterling performance while he held sway  as Chairman of the union in the State.

NDBDA Workers Threaten To Down Tools …Over Appointment Of ED, Poor Funding