The shareholders funds of five commercial banks dipped by N312 million in 2014, following fines they paid to Central Bank of Nigeria (CBN) for contravening the Banks and Other Financial Institutions Act.
Investigations by our correspondent showed that they are GT Bank, Zenith Bank, First City Monument Bank (FCMB), Access Bank and Sterling Bank.
A breakdown of the figure as contained in the banks’ annual reports showed that Access Bank paid the highest fine of N184 million for various contraventions in the period under review.
The bank was fined N184 million for not obtaining approval from CBN for the additions to investment in properties of N5.15 billion, non-compliance to implementation of the recommendations of a financial services provider, PricewaterhouseCoopers.
It was also fined for contravening the CBN’s foreign exchange manual and weaknesses noted in internal control and know your customer procedures.
A further breakdown of the fine indicated that Access Bank contravened the minimum documentation in the credit file and reporting of public sector deposit in line with CBN guidelines.
Sterling Bank followed by paying N50 million for under reporting of public sector deposits as at Aug. 29, 2014.
Zenith Bank came third in the list of corporate offenders with a fine of N48 million for non disclosure of date of last lodgment on credit print out, appointment of a deputy general manager and incomplete reporting of all transactions of politically exposed persons.
The bank was also fined for incomplete reporting of international funds transfer, incomplete reporting of some currency transactions and misclassification of some public sector deposit among others.
GT Bank during the review period paid N24 million as fine for the appointment of top management without CBN’s approval and infraction arising from anti-money laundering/combating the financing of terrorism spot checks among others.
Similarly, FCMB Group was penalised N6 million for not implementing prior year’s external auditors recommendations, incorrect returns to CBN and failure to comply with ATM operation standards.
Speaking on contravention, National Coordinator, Independent Shareholders Association,Mr Sunny Nwosu,  expressed concern about the various amount paid by banks for contraventions in 2014.
Nwosu said the amount would have translated to higher dividend for shareholders, noting that banks should be very careful and avoid wastage of shareholders’ funds.
“If we have a very punitive regulator, we should learn how to manage them,’’ he told  newsmen in Lagos.
Nwosu said that the board and management of the banks should bear the cost because of their negligence and not the shareholders.
President, Progressive Shareholders Association of Nigeria (PSAN),Mr Boniface Okezie,  said that the apex bank was killing the banks with fines and various regulatory headwinds.
Okezie said that some of the contraventions would have been resolved administratively as against the depletion of shareholders and banks operational funds.
He urged the CBN to temper justice with mercy and allow banks to survive and give investors’ value for their investments. 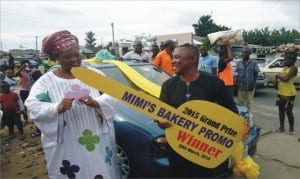 Women In Taxation Get New President