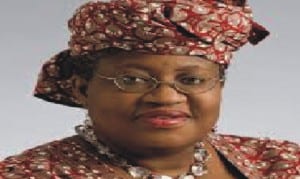 Minister of Finance and Co-ordinating Minister for the Economy, Dr Ngozi Okonjo-Iweala.