The Rivers State Governor, Hon. Chibuike Rotimi Amaechi, has berated Peoples Democratic Party (PDP), in the state, saying it cannot stop local government elections scheduled to hold on May 23.
Amaechi also dismissed claims by the party that the Rivers State Independent Electoral Commission, (RSIEC), acted outside its legal authority in announcing date for the polls. It would be recalled that a former Deputy Speaker of the House of Representatives, Hon Austin Opara, had last Friday, while on an Africa Independent Television, (AIT), breakfast show, disclosed that PDP in Rivers State had filed-suit in a court to stop the state electoral commission from conducting the election.
Speaking to newsmen Monday in Port Harcourt, Amaechi stressed that RSIEC is mandated by law to organize local elections, and has acted in accordance with the prescribed laws.
“If they are complying with the law, then they are in order. If they are not complying with the law then they(PDP) should go to the state High Court and stop it. If they go to the Federal High Court, they should know that the Federal High Court has no jurisdiction (on the matter), and I hope that everybody will be careful this time because the Federal Government will be serious with anybody who decides to manipulate the system,”he said
Amaechi maintained that the elections will allow the electorate to choose who will govern them. “You know in the last (general) elections, the people did not choose who will govern them. But this time, it will allow the people to choose who will govern them as chairmen of councils and councillors. I don’t see how they can stop the local government council elections from going on”, he added.
Amaechi equally cleared the air over media report that the All Progressives Congress, (APC), was having internal wrangling over ministerial appointments, saying the party was yet to conclude on the matter.
“There has not been any crisis whatsoever since the elections. There has been only one meeting that was held that has to do with zoning of offices, and they said the elders should go and zone the offices and the elders are yet to return to the party. So all you are hearing are speculations,” he said.
Amaechi, who is chairman of Nigeria Governors’ Forum, (NGF), backed President-elect, Muhammadu Buhari’s announcement that all in-coming ministerial appointees must declare their assets.
“They don’t have any choice. If you want to serve in the new administration you will have to abide by the rule to publicly declare your assets”, Amaechi added. 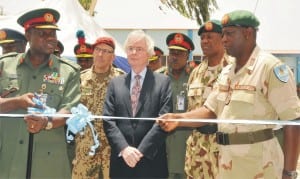