The All Progressives Congress (APC) in Rivers State has alleged attempts by the Independent National Electoral Commission (INEC) Resident Electoral Commissioner (REC), Mrs. Gesila Khan, and her staff to deny the party access to election materials meant to be submitted to the Rivers State Election Petitions Tribunal in Abuja.
The APC raised the alarm following certain steps earlier Friday, when INEC staff barred the state agents for the All Progressives Congress (APC), from accessing INEC premises.
The Tide gathered that APC agents were at the office to photocopy result sheets for the last elections in preparation for the party’s appearance at the Election Petition Tribunal.
In a statement Friday, Director of Communications, Greater Together Campaign Organisation (GTCO), Ibim Semenitari, said that “Since the agents began to visit INEC, they have been witnesses to gross misconduct and extensive electoral fraud going on at the INEC headquarters under the supervision of Khan and the Head of Administration, Mr. Bocco.
“At the INEC headquarters, Peoples Democratic Party (PDP), agents have always enjoyed unfettered access to thumb-print ballot papers so as to correspond with the figures they had allocated to their candidates and others,” the GTCO added.
“The thumb-printing and result writing is at present going on in three locations at the commission. The locations are INEC strong room located near the Administrative Secretary’s office; the store and inner store of the commission; next door to the legal officer locked with people inside; and the 23 LGA offices of INEC in Rivers State. Mr. Peter Ogunte, an INEC member of staff, is coordinating the illegal voting.
“As soon as the elections were ended, APC state party agent wrote to the REC requesting for some essential documents. The materials requested for were voter registers, materials distribution forms E25A, query log for accredited voters, and result sheets for all the 23 LGA’s.
“Under the electoral law, all results and other materials used for elections are meant to be available and accessible to all parties as soon as the elections are over. The law made the provision to enable possible litigants to seek redress before an Election Petition Tribunal who have 21 days within which to file any applications at the Elections tribunal.
“The APC had sent several reminders to the INEC REC, Mrs. Khan. As at today, 12 days after the purported elections, we are yet to receive the result sheets for five local government areas, only for party agents to be denied entry.
“The question to ask Mrs. Khan and Mr. Bocco is, what are they hiding and what other evil are they contriving?
“Since after the show of shame in Rivers State on March 28th and April 11th, the PDP and INEC in Rivers State have been re-writing the results, doctoring documents and thumb- printing ballot papers in its offices as well as hotels,” the APC stated.
The APC had raised this alarm repeatedly and wishes to reiterate its call on INEC Chairman, Professor Attahiru Jega to direct Mrs. Khan to comply with the electoral law as well as the Freedom of Information Act.
Jega was also expected to direct Khan to move all sensitive materials for the Rivers Elections away from Rivers State.
“We believe that Rivers people deserve to elect the government that would serve them, protect and defend their interest.
“Mrs. Khan and Mr. Bocco should not be allowed to wickedly thwart this most fundamental of all human rights as even God almighty allows us His creation our right to choose,” it noted. 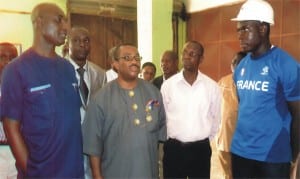