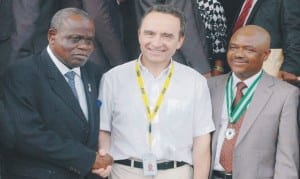 A political pressure group, South South Youth Consultative, Englightenment and Mobolisation Council (SSYCEMOC), has urged the President-Elect, Gen. Muhammadu Buhari, to show commitment in the passage of the Petroleum Industry Bill (PIB) when he assumes office next month.
SSYCEMOC’s Publicity Director, Nnodim Christian, who made the appeal in an interview with The Tide, last Friday in Port Harcourt said passage of a good PIB would bring justice, fairness and the much needed peace in the oil and gas sector.
Christian who expressed disappointment that the bill could not pass through the legislative processes in the country in spite of the number of years under President Goodluck Jonathan’s administration said, “Buhari would be doing the needful if he shows serious concern and also use his good position to expedite its passage.
“Good PIB is the very tonic our oil and gas sector needs. It will address the demands of the host communities, the local content development idea, and the multinationals as well as the government,” he said.
He regretted that such laudable initiative had remained caged at the National Assembly and wondered whose interest, the non-passage was satisfying and urged the incoming administration to take advantage of the laudable provisions to move the oil and gas sector to the net level in Nigeria.
SSYCEMOC spokesman lauded the interest expressed by Buhari on exploiting oil potentials in Chad Basin in Borno state, noting that, “immediately that is actualized, the impression of oil becoming a Niger Delta thing would be over. Issue of oil would be better appreciated in Nigeria.”
According to Christian, search for oil in the Chad Basin would be germane stressing that so much economic potentials in Nigeria remain dormant across all parts of Nigeria.
“His lack of the will to venture, that has kept us where we are. Who knows Nigeria version f American shall oil could be struck at Chad Basin, he said and advised the incoming government to extend that to other solid minerals deposits.