The Rivers State Chapter
of the All Progressives Congress (APC) is now set to challenge the results of the April 11 governorship election in the State at the Electoral Tribunal.
The election was won by the candidate of the Peoples Democratic Party (PDP), Chief Nyesome Wike.
The State Chairman of APC, Dr. Davies Ibiamu Ikanya who made the party’s intention known in a press statement on weekend reassured the people of the State that the APC would retrieve the mandate freely given to it and its governorship candidate, Dr. Dakuku Peterside.
Ikanya in the statement boasted that the PDP cannot be allowed to sand and govern in an electoral fraud committed against the people.
He said the APC has an iron-cast case against Wike and the PDP, expressing surprise that the PDP, is now desperately running from pillar to post in a bid to prevent APC from going to the Tribunal.
“We wish to appeal to our members and the entire people of Rivers State to remain calm and resolute as the party goes to the Tribunal to retrieve their stolen mandate. Our case is as clear as daylight, as even Prof. Wole Soyinka, Ambassador John Endwistle of the United States of America, the European Union Electoral Observers and other international bodies have since testified that the elections purportedly conducted in Rivers State were a sham,” Ikanya stated.
But the PDP said it is not scared by the APC’s threat to challenge the State Governorship results at the tribunal.
The PDP’s state chairman, Brother Felix Obuah, while reacting to the APC’s threat described the decision as a wasteful venture, expressing optimism that its candidate and Governor-elect, Chief Nyesom Wike will still emerge victorious.
Obuah in a statement signed by his Special Adviser, Media Jerry Needam, noted that in as much as it is normal and democratic for election results to be challenged justifiably, it finds the Rivers APC’s case as not yielding any positive result, adding that the APC does not have any evidence to justify its claims that the elections were compromised by the INEC officials, the security agencies and the PDP in the State.
According to him, “the PDP has nothing to fear in the case in the tribunal. 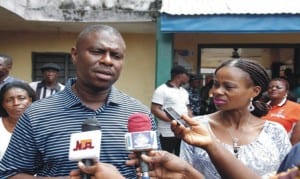 Dr. Dakuku Peterside, APC governorship candidate in Rivers State with his wife, Elima, speaking to news men after accreditation at his hometown in Opobo-Nkoro