Despite the uncertain clouds hovering over the 19th National Sports Festival, NSF, tagged Centenary Games scheduled for Calabar, Cross Rivers State, Team Rivers, overall winners and runners-up in the last two editions of the fiesta, is still determined to prove a point when the festival holds eventually.
Speaking with Tidesports yesterday, the Director of Rivers State Sports council, Hon. Daobu Harry regretted the postponements that have seen the festival not having a confirmed date at the moment.
According to him, Team Rivers in its bid to prove that their first position during the 17th edition at home and second place against all odds at the 18th edition in Lagos were no fluke, had had its athletes through Phase one and two camping exercises preparatory to the festival, and had hoped to move to Calabar from the third phase. But the postponements affected the state’s plan.
However, the state’s contingent is still eager to showcase its potentials whenever the festival holds.
The Director said all the organizing secretaries in the council have been busy as they have laid down programmes to pursue and implement whether in or out of major competitions.
That is why he sounded confident that the athletes would be ready to deliver whenever they are called upon because theyt rain routinely.
“Our secretaries cannot just fold their arms and be idle because the festival is not holding as scheduled, they have their programmes. We encourage them and their athletes be fit and ready at all times, besides the festival, they have other national regional and local meets and classics to attend.”
On when the team would resume preparation for the sports festival, Hon. Harry said that they were not the National Sports Commission, NSC or the main organizing committee, MOC, who would fix the date but that the state would be ready whenever the whistle is blown. 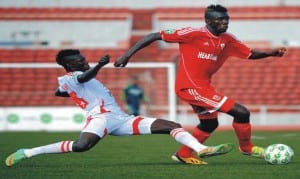 Obi may Head To Atalanta