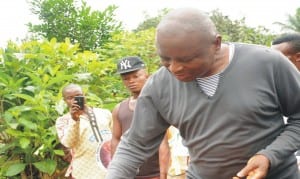 Rumours that the Independent National Electoral Commission (INEC) distributed fake result sheets to polling centres in Abia disrupted Saturday’s governorship and state assembly elections in parts of the state.
Our correspondent reports that voters who turned out for the exercise began to disperse when they received the report that fake result sheets were brought for the polls.
At Avodim Unit 6 in Ubakala, Umuahia South Local Government Area, a voter, Chief Ugochukwu Opara, said that the result sheet brought to the area was meant for a polling unit in Mgbarakuma.
“Considering the situation on ground, I suspect foul play and I have decided not to vote,’’ Okpara said.
It was further alleged that the result sheets did not have INEC logo.
At Umuwaya Road Primary School, Umuahia, many accredited voters started leaving the centre following a similar report that fake result sheets were brought to the venue.
They also complained that one of the ballot boxes brought to Unit 001 had “Afara’’ marked on it, hence their resolve not to vote.
This was in spite of the explanations by the electoral officers that the mistake would not affect the outcome of the polls.
There were also reports of ballot snatching by hoodlums at Ihechiowa in Arochukwu Local Government Area, World Bank Primary School, Umuahia, Ndagbo Ibeku, Afara Technical School, Umuahia and some areas in Osisioma Local Government Area.
There were also reported cases of shooting and snatching of ballot boxes at the School for the Blind, Low Cost Housing Estate, Umuobasi Eziama Afara and Abia Hotels, all in Umuahia.
Reacting to the allegation of fake result sheets in circulation, the Resident Electoral Commissioner in the state, Prof. Selina Oko, said that “it is not true’’.
Oko said that when she received the report from Ohuhu, she summoned the electoral officers in the area, adding that investigations showed that the allegation was unfounded.
Meanwhile, the governorship candidate of the All Progressives Grand Alliance, Dr Alex Otti, said that the election was “marred by violence and snatching of ballot boxes in some areas’’.
Otti further said that there were cases of card reader failure as well as physical attacks on voters by armed thugs in Aba.