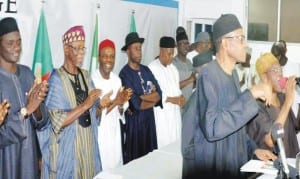 Bauchi
President-elect Muhammadu Buhari last Wednesday
thanked electorate in Bauchi State for supporting him during the Presidential and National Assembly elections.
Addressing APC supporters in Bauchi, Buhari also solicited for more votes on behalf of the party candidates in the April 11 gubernatorial and state House of Assembly elections.
“I am here to thank you and ask you to elect APC candidates during the exercise.
“This is because you voted for me and members of the National Assembly during the presiderntial elections.
“I urge you to do same during gubernatorial polls on April 11.”
Buhari condoled with the families of those who lost their lives during the polls and called on party supporters to cast and protect their votes.

Borno
The Borno State Government last  Wednesday said it
had awarded a N3.6 billion contract for the construction of five faculties and senate building at the proposed state University in Maiduguri.
Gov. Kashim Shettima stated this at an interactive session with stakeholders in Maiduguri.
Shettima said the project was expected to be completed before the end of the year, adding that the aim was to provide world class structure that would enable the university to take off smoothly.
“We are not in a haste to start the university because we believe that certain fundamental issues must be addressed before its take-off.
“Our plan is to establish a world class university that can stand the test of time in all ramifications because anything worth doing is worth doing well.
“We are not interested in establishing a glorified secondary school as the case in most state universities.

An octogenarian, Pa Owoeye Ajayi, has urged politi
cians in Ekiti against creating chaos in the state in the bid to impeach Gov. Ayodele Fayose.
Our correspondent reports that supporters of the governor had on Tuesday disrupted human and vehicular movement in the state while protesting the impeachment bid.
But Ajayi told newsmen in Ikole-Ekiti that many right thinking indigenes of the state were disappointed with the actions and utterances of the politicians irrespective of party affiliation.
“The performances of these politicians, in terms of constituency projects and poverty alleviation programmes since 1999 are not encouraging and is proof that they are not concerned about the welfare of the people.
“Ekiti people should be careful and caution themselves to avoid being used to cause violence by these politicians who might abandon them and stay away from the state when things get out of hand,’’ he said.

FCT
The Federal Government said that reclaiming territo
ries held by insurgents in the North-East and establishment of an atmosphere of peace and safety in them remained its top priority.
Coordinator, National Information Centre, Mr Mike Omeri, stated this while giving update on the security situation in the zone at a news conference.
Omeri said that the successes recorded by troops in regaining control of Boko Haram strongholds in Borno were testimony of the unwavering commitment in defeating the insurgents.
He said recent recapture of Alagarno in Borno, a well-known strategic stronghold of Boko Haram, had dealt a severe blow on their capacity to carry out surprise attacks on communities in the state.
“In a situation such as presently exists in the area, there is a high tendency for the insurgent group to suddenly aim at soft targets to destabilise communities which are regaining normalcy.

The INEC Resident Electoral Commissioner in Kebbi
State, Alhaji Jibril Zarewa, says the commission has received sensitive materials for Saturday’s governorship and House of Assembly elections.
Zarewa told journalists in Birnin-Kebbi last Wednesday that the materials included ballot papers and result sheets.
He said representatives of security agencies and political party officials witnessed the presentation at INEC office.
Zarewa said the commission would ensure timely distribution of the materials as well as early arrival at polling stations on Saturday.
He said non-sensitive materials had been distributed to local government areas while the sensitive materials would be distributed on time.
The INEC boss urged voters to ensure that they voted peacefully as they did during the Presidential and National Assembly elections.

Lagos
The Managing Director of Kora Farms, Mr Adebola
Adebusuyi, recently advocated for increased investment in tomato processing, to stem post-harvest wastages.
Adebusuyi, who is also a tomato farmer, told newsmen, in Lagos that such investment would also enhance the tomato value chain.
According to him, many tomato farmers incurred losses every year due to wastages that could have been prevented through processing them into tomato puree.
He said that the nation was blessed with abundant capacity to produce tomatoes, but that the demand for it could not be met as a result of wastages.
“Nigeria is the second largest producer of tomatoes in Africa, after Egypt.
“We produce about 1.4 million metric tonnes of tomatoes annually, yet we spend almost N11 billion to import tomatoes and tomato puree every year.

Oyo
The National Drug Law Enforcement Agency
(NDLEA), Oyo State Command, has paraded a 45-year-old unemployed graduate, Sam Oladiti and four others, for document forgery.
The State Commander, Mrs Omolade Faboyede, told newsmen in Ibadan that the individuals had collected the sum of N20,000 from one Kafayat Mustapha under the false pretence of obtaining an NDLEA Visa Clearance for her.
Our correspondent reports that the other suspects included Olawale Lawal (38), Yusuf Kazeem (28), Olusina Adewale (39) and Bolaji Kayode (35).
Faboyede said that the complainant, Mustapha, discovered she was issued a forged document because it was signed with the name of a past NDLEA chairman.
Plateau
Street sweepers in Plateau State have in Jos appealed
to the government to pay their six months’ salary arrears.
The sweepers, who spoke under condition of anonymity, told our correspondent that the development had turned them into destitutes.
“We are paid N8, 000 each on monthly basis and we are surprised that our salary was stopped while we are still engaged by the government.
“Since last year September we have not received our monthly stipend that we are entitled to due to the job that we do, “ one of them said.
Another sweeper, while calling on the government to come to their rescue, said the money was her only means of livelihood.
“ I am a widow with three children and this is what I use in feeding and training them, “ she said.

Sokoto
The Independent National Electoral Commission (
INEC) says it has reconfigured over 4,000 Smart Card Readers for use in the April 11 governorship and state House of Assembly elections in Sokoto State.
The Head of Voter Education and Publicity Unit of the commission in the state, Alhaji Musa Muhammad, disclosed this to newsmen in Sokoto while commenting on the preparations for the polls.
‘’Over 4,000 card readers were deployed to the state for the March 28 Presidential and National Assembly polls, while 3,518 were actually deployed in the 3,035 polling units across the 23 local governments of the state.
‘’ All the 4,000 card readers had, therefore, been totally reconfigured and they are now being charged, while they are perfectly functional.’’

A Magistrates’ Court in Gusau, Zamfara State, has re
manded one Abduljalal Muhammad of Sabuwar Haya Area, Tudun Wada, Gusau, in prison custody over alleged armed robbery.
The prosecutor, Insp. Yakubu Abuga, told the court that sometime in Feburary 2015, the accused boarded a commercial motorcycle of one Shafiu Shehu of Hayin Mallam Sani Area, Tudun Wada, Gusau.
Abuga said that the accused told Shehu to take him to Garajin Mailena, along Magami road, Gusau but at a point behind Water Board, Gusau, he asked the motorcyclist to stop, after which he stabbed him on the back with a sharp knife.
He said that the accused robbed the motorcyclist of all the money he had and a handset, valued at N4,500.00, including his Bajaj motorcycle with registration number EKY090QB, valued at N115,000.00.