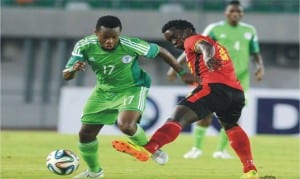 Nigeria’s Ogenyi Onazi (17) in contest with a Ugandan opponent, during their recent friendly in Uyo, Akwa Ibom State