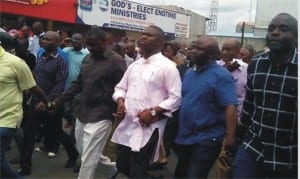 Rivers State APC gubernatorial candidate, Dr Dakuku Peterside (3rd right) leading a protest march in Port Harcourt yesterday against INEC over alleged irregularities in the conduct of the Presidential and National Assembly polls in the state.