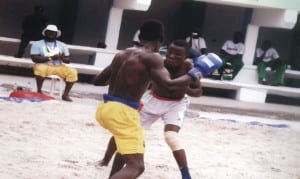 A 2004 Olympic Bronze
medalist, Deji Aliu, has advised sports administrators not to mix politics with sports.
Aliu told newsmen in Lagos that mixing sports and politics would affect sports development.
The Olympian, who spoke after organising his talent hunt audition, tagged ‘’the Making of Champions’’ said that sentiments should be discarded when conducting trials.
“We are very sentimental in this part of the world.
“But for me, being an athlete, I have been there, I have seen it all, I will always celebrate talents. I do not want to know where you are coming from or who you are.
“When I saw a talent at the Lagos audition, who I heard competed at the IBILE Games but was not picked, I knew he will be great, he has not really had training but if trained well, he will be big in the world.”
Aliu, who was also a 100m gold medalist at the 1994 World Junior Championships in Portugal, noted that talent in sports goes with time, “so real talents discovered should be given the opportunity.
“He is not my athlete; he is not going to be in the team, that notion is not fair; it is not fair to the state and the country.
“People who think like that should be sent out of the system.
“I will be a coward if I shy away from this issue because it has been going on for a while. They do not want the best athletes to be there, rather, they want their own athlete to be there.
“This is not helping the system because they feel they are not going to take the glory but then if you don’t take the glory as an individual, the country will take, so why don’t you look at it this way.
“We have a lot of talents in Nigeria but they are untapped and I thought let me do my quota by discovering and nurturing talents to Olympics standard,’’
He said that track and field was still the best sport, advising would-be athletes not to give up on their dreams, saying they should allow their speed and pace to work positively.
“Track and field is still the best sport even if somebody does not like your face, when your leg starts doing the talking, they won’t have any choice but to accept.
Aliu noted that those who discriminated against some athletes start running after the athletes when they see the athletes proving their mettle.
“When a talented athlete start raising up shoulders, they say he or she isn’t discipline, forgetting how they have rubbished the athlete in the past.
“When these talents start performing well, you see all these people running after then,” Aliu said.

Stakeholders Urged To Contribute To Development Of Skating