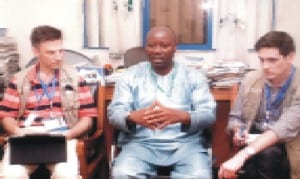 Bayesla State Governor,
Hon Seriake Dickson has signed the 2015 budget proposal of N251,56,173,363 into law.
Speaking shortly after signing the appropriation bill, christened, ‘Budget of Further Consolidation and Completion,” in Yenagoa, Governor Dickson lamented the drop in the state’s revenue receipts of 50%, which has adversely affected the government’s development projections.
The budget which had an estimate of N320 billion, was reduced to N251, 56,173,63 by the State House of Assembly, to reflect the present economic challenges of falling crude oil prices, thereby making the budget implementable.
According to Governor Dickson, in spite of the State’s revenue receipts of 50%, projects are still being funded, even though the pace has been slowed down by financial constraints.
He also stressed the need to intensify efforts at boosting the internally generated revenue of the State, assuring that, the government would devise ways of building an alternative source of revenue to sustain the economy.
Presenting the 2015 budget proposal for the Governor’s assent, Speaker of the State House of Assembly, Rt. Hon Konbowei Benson gave a breakdown of the revenue and expenditure profile of the budget.
Rt. Hon. Benson explained that, the revenue profile comprises statutory allocation of N182.8bn, VAT N8.6bn, internally generated revenue N11.5bn, internal loans N48.8bn amounting to N251, 56,173,63.
On the expenditure profile, the Speaker said personnel cost stood at N49.5bn, overhead cost N49.6bn, consolidated revenue charges N56.8bn and capital expenditure of N95.7bn, totaling N251bn.
Mr. Konbowei described the budget as a balanced one, which is the 4thin the life of the present administration.
Meanwhile, the Chairman of the Local Government Service Commission, Chief Adolphus Forcados has been sworn in alongside three new Executive Council members.
O
The executive council members are Ms Nengi Rufus-Spiff for Women Affairs, Chief Tubonah Talbot Nengi, Special Duties, Bayelsa East Senatorial District, while Mr. Freedom Josiah Osain was sworn-in as Tourism Commissioner.