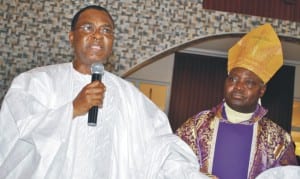 The Adamawa State command of the Nigeria Immi
gration Service last Wednesday, met with the leaders and representatives of ECOWAS and other African nationals in the state over Saturday’s elections.
Addressing the leaders, the Comptroller, Mr Ubi Nkanu, urged them to warn their members to steer clear of the elections.
Nkanu said any foreigner caught trying to vote or participate in the election would be dealt with, adding that some illegal aliens were recently caught with voters’ cards and had since been deported.
He said that the command had mobilised its men to ensure that no foreigner voted during the elections.
Nkanu said Nigeria’s borders would remain closed during the elections and urged everyone to remain calm, peaceful and law-abiding.

The Benue State Police Command has denied ar
resting innocent citizens ahead of the March 28 and April 11 elections.
The Police Public Relations Officer, ASP Austin Ezeani, made the denial in an interview with  newsmens in Makurdi.
The spokesman, who was responding to complaints by residents over alleged arbitrary arrest by the police, said the raid was targeted at criminals and not to victimise anybody.
According to him, the raid is based on privileged information and innocent persons would be released after thorough screening.
“The operations has yielded positive results as the police have recovered arms and illicit drugs, especially cannabis sativa, charms and stolen vehicles”.

Senator Mohammed Ndume has expressed optimism
that the military will liberate Gwoza from Boko Haram insurgents very soon.
Ndume (APC-Borno South) stated this during a chat with newsmen in Maiduguri.
He said the military had demonstrated high sense of patriotism in its recent anti-terrorism war.
“In the last five weeks, the military had performed creditably by reclaiming 22 communities from the insurgents.
“I believe that the remaining communities will be reclaimed in the shortest possible time.
“Gwoza, which is the strong hold of the insurgents, will be reclaimed any moment from now, going by recent developments.
“I think that the soldiers deserve commendation for what they are doing’’, Ndume said.

Ahead of the elections, traditional rulers in Ekiti on
Wednesday assured  NYSC members to  be used as INEC ad-hoc staff  of their safety.
The monarchs gave the assurance when a team of the  NYSC management led by the State Coordinator, Mr Chidube Ibeh,  visited some of the monarchs.
Our correspondent reports that NYSC team visited the Ewi of Ado-Ekiti, Oba Rufus Adejugbe, Arinjale of Ise-Ekiti, Oba Adetunji Ajayi,  and the Elemure of Emure, Oba Adebowale Adebayo.
Other monarchs visited were  the Oluyin of Iyin-Ekiti, Oba Ademola Ajakaye,  and the Regent of Ikere-Ekiti, Ayooye Adegboye.
Addressing the team in their palaces, all the monarchs visited described Ekiti people as peace-loving who would never do anything that would endanger  the lives of the corps members.
FCT

Director-General, Nigerian Meteorological Agency
(NiMet), Dr Anthony Anuforom,  said the agency was committed to building climate knowledge required for action through the automation of its climate observatories.
Anuforom said this while addressing newsmen during activities marking the 2015 World Meteorological Day with the theme, ‘Climate Knowledge for Climate Action’ in Abuja, recently.
He said that NiMet had embarked on the automation of its observatories around the country, to enable it to provide climate knowledge for climate action, with six locations currently on the test run.
Anuforom said the theme of the year was timely and apt, following the completion and inauguration of NiMet’s Information and Communications Technology (ICT) centre.

The Minister of Transport, Sen. Idris Umar, has called
on the electorate in Gombe state to eschew violence in the upcoming elections.
Umar made the appeal while speaking with newsmen in Deba, headquarters of Yamaltu/Deba local government area of the state on Wednesday night.
He advised the electorates to conduct themselves orderly to have peaceful polls.
“Well, we thank God, the elections are here on Saturday the 28th of  March this year and of course, on the 11th of April of this year.
“My message to the people of Gombe state and Nigeria as a whole is that we should conduct ourselves orderly during the elections so that have peaceful conduct of the elections,” he urged.

Lagos State Governor Babatunde Fashola, has urged
voters not to make trouble as they wait behind to defend their votes after casting their ballots.
Fashola spoke at the All Progressives Congress (APC) campaign rally in Somolu area of the state.
He emphasised that there was no law prohibiting the electorate from staying behind at the polling units after voting.
“Some people have said that you should not stay near the polling units after voting; that is untrue.
“Let me tell you something, election is governed by law; I am saying this because I am not just a lawyer but a leader in the legal profession.
“There is nothing in the electoral law that stops you or prohibits you from staying at the polling units to defend your votes.

A 23-year-old taxi driver, Tosin Olayinka, has been arraigned before an Abeokuta Chief Magistrates’ Court for allegedly stealing the belongings of his passenger and a tyre.
The Police Prosecutor, Insp. Sunday Eigbejiale told the court that the accused committed the offences on February 26  and on March 4 at 66 Majekodunmi Street, Iberekodo, Abeokuta.
He said the accused stole the handbag of one Felicia Obasa containing N58,000 when she (Obasa) boarded Olayinka’s taxi on her way to Moshood Abiola Polytechnic.
Eigbejiale said the accused also stole the front tyre of a taxi owned by one Dauda Fasasi.
He said the tyre cost N8, 000.
The prosecutor said: “the accused is a habitual criminal who disguises as a taxi driver; he is fond of carrying passengers to different destinations after assessing their belongings.

The Pankshin local government council in Plateau said
it had executed projects worth more than N500 million since its inception last year.
The Supervisory Councilor of  Works, Mr. Emmanuel Danboyi said this in an interview with newsmen in Pankshin.
“I assure the people of this area that with more funds, the council would execute more projects, “ Danboyi said.
He listed some of the projects to include: a Township Stadium; boreholes/hand Pumps and roads/culverts.
Others are: 23km Mile V-Nyelleng-Wuseli road; 10 km Llankan-Abwor Dyis road and Wuseli and Tal bridges.

The Assistant Inspector-General of Police (AIG) in
charge of Zone 10, Alhaji Bala Hassan, has said that the police are ready to provide security during Saturday’s presidential election in the zone.
The zone comprises Sokoto, Kebbi and Zamfara states.
Hassan told newsmen in Sokoto that an effective operational order on how to provide security at each of the polling units had since been made and issued to the commissioners of police in the area.
He said that the police commands had embarked on “operation show force” with other security agencies to show their preparedness for the elections.