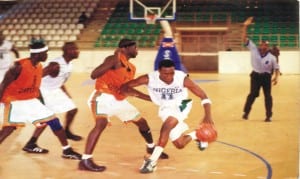 A basketball action between Nigeria’s male team and their women counterparts in a previous contienental tourney.

Nigeria’s senior national team, the Super Eagles will today in Uyo, Akwa Ibom State begin a rebuilding process towards ensuring qualification for the 2017 Africa Cup of Nation and 2018 World Cup, as they confront the Cranes of Uganda in an international friendly game.
Returning to the venue of their massive disappointment last time out, when they failed to beat South Africa and qualify for the recent 2015 Africa Cup of Nations, the Super Eagles will be hard pressed to impress
Apart from the need to return to winning ways today’s friendly, one of the two for this month’s FIFA window will afford many returnee and new players in the Eagles the opportunity to show what they can do and convince the national team handlers of their relevance as the team seeks to turn a new page.
Already, the Ugandans despite leading on head –to-head contest, having won three to Nigeria two of the previous six meeting between the sides, see themselves as the underdogs. According to their coach Milutin ‘Micho’ Sredojevic, this game will test our character because the Super Eagles are a high profile team and facing them at home even makes it the best stage for my players. This friendly will help us test so many things ahead of the 2017 AFCON and 2018 World Cup qualifiers
Thus, the Super Eagles must, apart from trying to improve their records against the Cranes, go to show hunger and ability to reclaim their pride of place in African football.
Meanwhile, skipper Vincent Enyeama is set to win his 100th cap in the game if fielded. The Lille of France safest hands has been regular between the stacks and the Nigeria Football Federation, NFF recently confirmed that the keeper is on 99 caps and would reach the century milestone today.
Conven intly, the fixture will take place in Enyeama home state of Akwa Ibom and he would not wish better than to cap the milestone with victory. It will e recalled that Uganda took the place of Bolivia for the friendly after the South Americans withdrew, citing safety concerns.