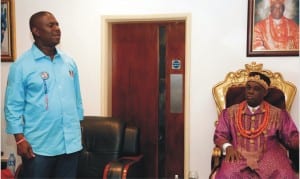 The Chairman Rivers State Council of Traditional Rulers and Chairman, Supreme Council of Ogoni Traditional Rulers, His Royal Majesty, King GNK Giniwa,  has reaffirmed the commitment of the entire Ogoniland to governorship candidate of the All Progressives Congress, APC in Rivers State, Dr. Dakuku Peterside and his party.
The monarch, who spoke in his palace at Korokoro, in Tai Local Government Area Rivers State during a courtesy call, described the Ogoni as straight-forward people who keep to their words.
“The in-coming governor, my son and my friend, we are with you. Is anybody surprised I referred to him as my friend? When your hands are clean, you can eat with kings. Peterside has thoroughly washed his hands, so,   he is eating with kings”, he said.
“I want to assure you that Ogoni people are not wayward people. We don’t say one thing today, and say another tomorrow. You are an Ogoni man, so you know our tradition. Whatever you want in Ogoniland will be given to you. I want to enjoin all  Ogoni to support Peterside and the APC.
“Let me use this medium to call on our people to forget about intimidation. I am one of the people who fought for the creation of Rivers State in 1967. So, I am not bothered by intimidation. I want to advise you, Peterside, to go ahead with your campaign; we all know you have supporters across the state”, Gininwa added.
In his response, Peterside thanked the royal father for the support, and promised not to disappoint Rivers people, if elected governor of the state.
The Tai LGA ward rallies, which took Peterside and the Greater Together Campaign Organisation to Bunu, Korokoro and all the wards of the local government, dwelt essentially on the need to support the APC and its candidates in all the elections.
The party warned that if Ogoniland must survive the grand conspiracy against it and its people, then they must take necessary actions against forces that are not in favour of their survival as a group.
The first step, according to them, is to work for APC, which promises change and better living conditions.