Thirteen out of the 26
political parties in the country on Wednesday pledged to work with the All Progressives Congress (APC) towards ensuring free and fair elections in the country.
The National Chairman of the Peoples Democratic Movement (PDM), Dr. Bashir Ibrahim who led representatives of the parties on solidarity visit to the APC presidential candidate, Major-Gen. Mohammadu Buhari (rtd) in Abuja on Wednesday said they would stand by the APC by ensuring that a free, fair and credible elections are conducted.
“We are here to collaborate with the APC. It is unfortunate that some political parties have decided to serve their masters rather than the country. We are here to inform you that we will stand by you and on the side of the truth,” the PDM chairman said.
Receiving the parties, Gen. Buhari commended those who had agreed to work with the APC, describing their decision as patriotic.
“I honestly appreciate how you arrived at this decision to cooperate with us in this election. This decision is very patriotic. We have to appreciate the stage we are in. We have to realize that we can save the system and our country if we come together,” he said.
Buhari accused the ruling Peoples Democratic Party (PDP) of sentencing Nigeria to economic and political under-development since it assumed power 16 years ago, adding that the country had made more money between 1999 and 2015 that it made between 1914, when amalgamation took place and 1999 when the PDP took over power.
He challenged the PDP to tell Nigerians how it had utilised the resources of the country in the last 16 years it has been in power.
“We challenge the PDP, let them account for their stay in power for 16 years in terms of the fundamental objectives we have been talking about in the area of security, the economy and corruption.
“We have been very consistent about these issues but people who are sitting on the periphery have kept on making noise and wasting our time. Let them come and defend themselves on what they have done in the last 16 years with the incredible resources they made within this period, the incredible resources this country realised within this period, which is much more than what the country made since amalgamation in 1914. If you like, go and get this record from the central bank,” Buhari said.
The APC presidential flag-bearer also decried the state of the nation’s economy, especially the value of the naira, wondering why N220 should be exchanged for a dollar.
“Look at the state of our naira. Now, you have to get N220-something for a dollar. How can we develop under this system? he asked.
Among the parties present during the visit to Buhari included PDM, African Peoples Alliance (APA), Social Democratic Party (SDP), Hope Democratic Party (HDP), Kowa Party, African Democratic Congress (ADC), Democratic Peoples Party (DPP), United Peoples Party (UPP), Accord Party (AP), Action Alliance (AA), Independent Democratic Party (IDP) and Unity Party of Nigeria. 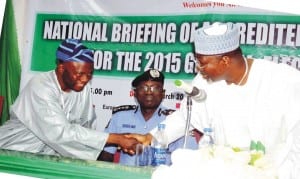 Election and Party Monitoring Committee, Prof. Lai Olorode (left), in handshake with Chairman, Independent National Electoral Commission, Prof. Attahiru Jega, during the national briefing of accredited observers for the 2015 General Election in Abuja, yesterday. With them is the Inspector General of Police, Suleiman Abba.