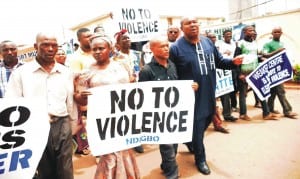 Former Chief of Army Staff,
General Azubuike Ihejirika, has blamed the lack of creativity and innovation among youths in Abia State on politicians, saying they destroyed the dignity of labour by encouraging sycophancy among them.
He made this assertion at his Isiukwuato country home, at the weekend, when the Abia State Progressive Peoples Alliance (PPA) gubernatorial candidate, Sir Chikwe Udensi, his deputy, Uche Enyioko, and other PPA candidates paid him a courtesy visit.
Ihejirika said what Abians failed to realise was that the dangerous trend of praise-singing among Abia youths, if not discouraged, would take the state backwards.
“Instead of engaging in profit-making ventures and businesses, women and men mostly in their 40s have indulged in praise-singing as profession and means of livelihood.
“What we do not understand is that we are moving backwards and something must be done to discourage this,” Ihejirika said.
He also decried the deplorable state of roads in Abia State, saying the terrible nature of the roads would tell “you that you are within the Abia State territory when driving in from other neigbouring states.”
He expressed confidence  that elections in Abia State would be free in the sense that the candidates would be free to talk to the electorate without circumscription and fair in the sense that nobody would prevent the electorate from casting their votes for their choice candidates.
He also said Abians were hoping for the best, adding that anything that would not bring progress to Abia State would not be acceptable this time around.
He, however, wished Udensi and his team well in the pursuit of their dreams as well as thanked them for their visit, which he said, was an honour that he appreciated very much.
Describing Ihejirika as a great Igbo and Abia son, Udensi said the retired general was a 24 carat Igbo man whom all Igbo were proud of. He added that his numerous achievements, which included the establishment of Army Barracks in the state and other logistics, stood him out among others.
“We want to thank you for your support; I want to use the opportunity to tell you that Abia State will experience unprecedented transformation under my watch as the governor of the state if elected,” Udensi said.