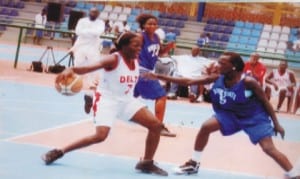 Female basketballers in contests during a past national compoetition

Some athletics fans have
urged the Athletic Federation of Nigeria (AFN) to monitor the development of the athletes who won the 12th African Junior Athletics Championships recently.
The championships held from March 4 to March 8 in Addis Ababa, Ethiopia.
For Nigeria to retain its title as champions of the continent which it secured in 2014, the athletes topped the medals table with 12 gold, eight silver and seven bronze medals.
South Africa was second with nine gold, seven silver and seven bronze medals, while hosts, Ethiopia came third with six gold, 12 silver and10 bronze medals.
Egypt was fourth with five gold, five silver and three bronze medals.
The fans told newsmen that the country’s 34 athletes were worthy of commendation, saying that Nigeria was blessed with talents.
Deji Aliu, a 100m gold medalist at the 1994 World Junior Championships in Portugal, said he was impressed with the athletes’ performance, saying there should be a follow-up on the athletes.
“I am impressed with the performance of the athletes, the fact remains that they did well. But it usually ends there, that is the problem we have in this country.
“There should be follow-up these athletes, I hope that when the athletes return to their base, it won’t end there. They should be monitored, tutored to see how they have improved.
“There are abundant talents, there is no doubt we were going to win in Africa but how do we continue to groom them to become world class,’’ he said.
Christian Aiyegbeni, who took part in relays at the African Junior Athletics Championships in 1997, said the athletes were worthy to be praised, urging that they should be groomed to international level.
Aiyegbeni said the athletes if properly managed they would be ranked top at international events, stressing that the nation was blessed with a lot of talents.
“These young athletes have really done the country proud, they deserve all the praise they are given.
“With their performance and retaining title as Africa’s champions, proper grooming will push them to international standards,’’ he said.
AFN’s Technical Director, Commodore Omatseye Nesiama, expressed joy at the athletes’ performance, noting that they surpassed their past record of nine gold, seven silver and three bronze medals.
“I am happy with their performance, they have represented the country with so much hope, focus and determination and it worked for them,’’ he said.
Nesiama also said that the AFN would take fresh steps to improve on the men’s pole vault and heptathlon.
“We are making fresh moves into events like the heptathlon as well as the men’s pole vault to see how we can improve and win medals in the future,’’ he said.

Dolphins, Others React Over Walk-Over