The House of Representatives yesterday summoned the Minister of Petroleum Resources, Mrs. Diezani Alison-Madueke, over the decision of Shell Petroleum Development Company of Nigeria (SPDC) to relinquish its interest in some oil blocs called Oil Mining Licence II.
The Minister is to appear with the Managing Director of SPDC to explain the bidding process for the blocs.
The House noted that some “discrepancies and insider trading arrangements” within SPDC on the bidding process for the bloc had been reported.
The resolution followed a motion moved by a member from Abia State, Mr. Abonta Nkem-Abonta.
The House said it was interested in knowing whether the country’s Local Content Law had not been breached in any way in the ongoing bidding process.
“The House notes the circumstances surrounding its intended exit from the said bloc. It recognises the need for local content and development in the oil sector.It also acknowledges the need for compliance with the Local Content Act in order to accommodate host communities in the process of bidding for oil bloc OML II, which will soon be relinquished by SPDC,” part of the motion read.
The House named Gokana and Tai (Ogoni), Oyigbo, Asa, Ukwa Oil Field (Abia) and Andoni, Opobo, Bonny (Rivers) as the communities where the blocs are located.
Also, the House of Representatives yesterday slashed the crude oil benchmark for the 2015 budget to $54, down from the $65 originally proposed by President Goodluck Jonathan.
Lawmakers took the decision as they considered and approved the 2015-2017 Medium Term Expenditure Framework and Fiscal Strategy Paper.
The approval of the MTEF is a mandatory requirement preceding the passage of the 2015 budget estimates of N4.3trillion by the National Assembly.
The Senate already approved the MTEF last week, an indication that both chambers may likely pass the budget itself next week.
The Senate had passed $52 as the oil benchmark.
In slashing the benchmark, the House adopted the position of its Joint Committees on Appropriations, Finance, Aids/Loans and Debt Management, which advised against the $65.
The report of the committees indicated that the $65 was not sustainable in the face of the crashing crude oil prices globally.
However, the House retained the oil production projection of 2.278,2mbpd (2015);ý 2.327,1mbpd (2016); and 2.406,7mbpd (2017) proposed by the executive.
While raising projected non-oil revenue for the 2015 budget from N3.5tn to N4tn, lawmakers cut the total recurrent proposal from N2.6tn to N2.5tn.
On the capital side, the House raised it from N633.53bn to N700.78bn.
Statutory transfers also dropped from N411.85bn to N368.27bn.
But a decision of the House likely to generate tension between lawmakers and the Presidency was the scrapping of the Service Wide Vote, where the government put N360.94billion to spend this year.
The SWV has generated controversies lately, as the House complains of not knowing how the vote is utilised.
Just last week, the House Committee on Public Accounts reported that only Jonathan, the Minister of Finance, Dr. Ngozi Okonjo-Iweala; and the Director-General of the Budget Office, Dr. Bright Okogu, had access to the account.
The House, acting on the report of the joint committees, relied on the findings of the PAC, which is headed by Mr. Solomon Olamilekan. 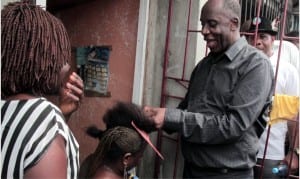 Leading by example: Rivers State Governor, Rt. Hon. Chibuike Rotimi Amaechi plaiting the hair of a woman as he convinces her to vote for the All Progressives Congress (APC), during his door to door campaign in Bonny Island, Rivers State, Wednesday.

Attacks On Clubs: GM Calls For Protection For Dolphins, Sharks