Barring last minutes
change, the Independent National Electoral Commission (INEC) will tomorrow conduct mock voting sessions in 12 states of the federation to test-run the use of smart card readers, ahead of the March 28 and April 11 elections.
To this effect, the INEC chairman, Prof Attahiru Jega, has deployed all National Commissioners and Resident Electoral Commissioners (RECs) in 12 states for the mock elections.
Two states in each of the six geo-political zones of the country have been selected for the experimental voting exercise.  They are: Ekiti and Lagos (South-West); Anambra and Ebonyi (South-East), Delta and Rivers (South-South); Kano and Kebbi (North-West); Bauchi and Taraba (North-East) and Niger and Nasarawa (North-Central).
Reports from INEC indicate that in each of the states selected for the mock election, some electoral wards with sizeable registered voters would be considered for the trial voting.
The essence of the mock elections, according to INEC,  is to enable the commission ascertain the functionality of the card readers, with a view to making necessary adjustments before the March 28 Presidential and National Assembly elections.
It will be recalled that the use of the card readers has been vehemently opposed by the ruling Peoples Democratic Party (PDP) on the excuse that the device violates the nation’s electoral act which forbids electronic voting in the country.
A statement signed by the Head, Protocol and Publicity of INEC in Rivers State, Anthonia Nwobi, stated that the Registration Area Ward 1 Oromineke/Ezimgbu of Port Harcourt City Local Government Area (PHALGA) in Rivers State will be used for the conduct of the mock elections in the state.
Nwobi also disclosed that the trial voting will take place in all the 23 units of ward 1 and the 19 voting points.
She urged all the registered voters in ward 1 of PHALGA to come our enmasse for the field test exercise.
“The planned exercise, which has been slated for Saturday, March 7, 2015 will start from 8.00am and would be carried our by 188 trianed INEC staff. This clarification process will be the replica of election day where smart card readers and permanent voters cards are expected to be used for the accreditation exercise,” she said.
Meanwhile, INEC has created additional 35,000 polling units ahead of the rescheduled general elections, it was learnt yesterday.
There are 120,000 polling units in the country. Attempt by the commission to increase it to 150,000 was received with mixed reactions, forcing it to drop the idea initially.
The Chairman, Information and Voter Education Committee of INEC, Dr Chris Iyimoga, who broke the news of additional polling points, argued that the essence was to allow for ease of voting process. 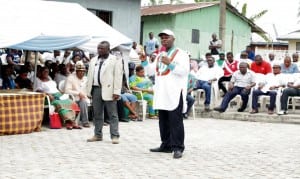