There will be mixed
feelings and fear of the unknown  tomorrow at the Port Harcourt Liberation Stadium, as Dolphins FC will play host to Leones Vegetarians FC of Guinea, in the second leg of CAF Cup.
Anxiety and nervousness have started to grip dolphins players and supporters, following the poor performances of the club in recent outings, especially, the  just concluded Super Four, where  the team played five matches and lost all. Besides, they also lost to their visitors by a lone goal, a forthnight ago.
Dolphins technical adviser, Stanley Eguma, attributed the unimpressive performance to late preparations occasioned by players not reporting  to camp early.
In spite of , all these, Eguma still believes that his team will scale through to  the next stage, as the technical crew has plugged the loopholes noticed in their previous games.
According to him, the team is now fully recovered from  the exit of Emem Eduok team’ s goal machine, saying that in football, players come and go and that  the club has gotten adequate replacement.
“Dolphins settled for Christian Pygbara, he can comfortably fit in the shoes of Emem.
He has a knack for scoring goals and he did so last season, so we  will hope he continues that way this season, especially in the CAF Confederation cup, apart from him also  we have other good strikers like Omo  Johnson and Ifeanyi Egwim. “ Eguma said.
He continued that his players were in high spirit,  Mentally and psychologically balanced to  ensure success in  the encounter.
Eguma noted that his players have demonstrated more commitment and vowed to win the game to make the country proud, especially Rivers State.
Dolphins captain Sunday Rotimi said that  what happened in Malabo has been put behind them.
He said they would have won, but his players lost many scoring chances, saying that if they had converted at least  two goals, his team would have been at an advantage.
However, fillers from the visitors camp who arrived yesterday have revealed that they plan to repeat what they did at home.
According to the source, the Vegetarianos are sound technically and determined to run away with victory.
however, it is expected  that Dolphins players would  not repeat what happened in Malabo, going to the match about an hour to  kickoff time, following non-payment of match bonuses and salaries. They must put on their shooting boots and take their chances as they come. 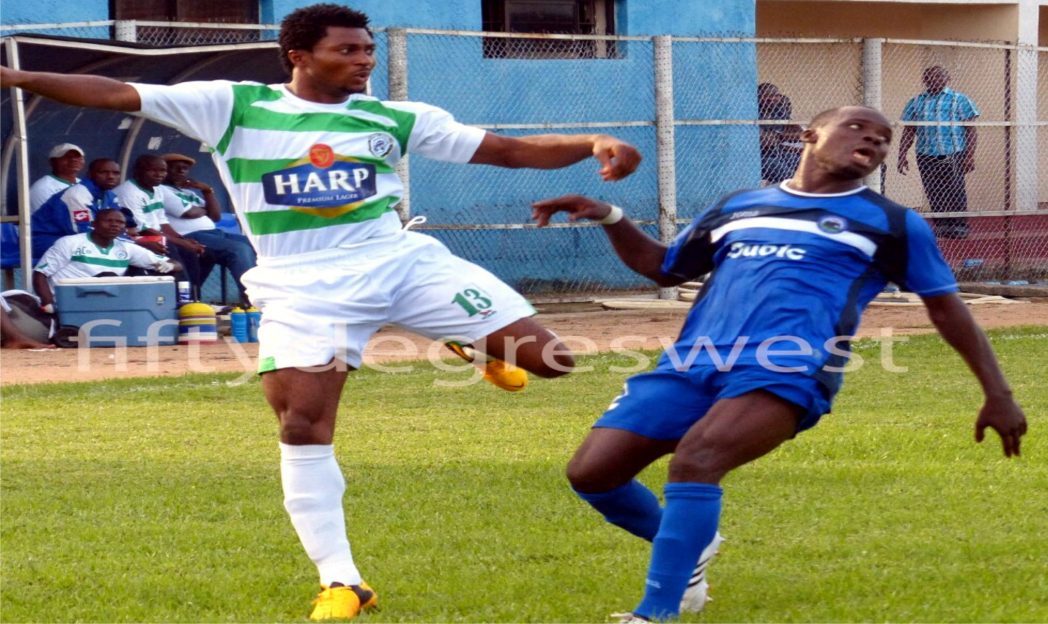 A Dolphins attacker (left) against an Enyimba opponent in a Glo Premier League game, last weekend.