Following the increase in
political intolerance and crisis among politicians in Rivers State, the police authorities have warned that they will deal with any politician or group of persons causing problem in the state.
The Assistant Inspector-General of Police (AIG), Zone 6, Calabar, Tunde Ogunsakin, gave the warning while briefing newsmen in Port Harcourt over the recent political disturbances in the state, Monday.
According to the AIG, the press briefing was necessitated by the recent disruption of the All Progressives Congress (APC) rally in Okrika LGA last week Tuesday.
He regretted that the attack led to the death of one Police Officer Ifeanyi Okorie, and injuring of some persons, including an operative of the Department of State Service and one journalist that were stabbed.
‘It is sad that it was in the course of repelling the assailants that we lost one of our men, although the intervention of our officers greatly minimised the impact and injuries”.
Ogunsakin, who recalled that on Wednesday, 4th February, 2015, he had a meeting with all political parties and stakeholders in the state during which he reiterated the mandate from the Inspector General of Police (IGP), Suleiman Abba, to ensure that electioneering activities are conducted under a peaceful and hitch-free environment.
He opined that during the meeting, it was agreed that political activities must effectively accommodate the interests of all without undermining the fundamental human rights of the citizens, and without also compromising the peace, order, security and safety of lives and property in the state.
‘It is important to state that in the course of the aforementioned meeting with the political parties and stakeholders, candidates and other political actors signed a Peace Accord, which was committal in nature to the effect that all political actors will, among other things, eschew all forms of electoral violence. Unfortunately, it has become apparent that the political actors who were at the meeting are not complying with the peace accord”, he said.
The AIG stated that the meeting further resolved that in the event of any violation of the Peace Accord, appropriate sanctions should be meted on the violators, adding that it was in the strength of the above that he has temporarily relocated his  office to Port Harcourt.
The Police boss warned that he will no longer condone any act that would disrupt peace and order in any part of states under his control, especially Rivers State.
Ogunsakin said that he has the capacity to overwhelm any persons or groups that will rise to contravene the Electoral Act or disrupt the peace, adding that in line with his intention to partner with all communities, established institutions and all relevant stakeholders, he met with politicians and religious leaders from Okrika and Ogu/Bolo LGAs where he re-iterated his commitment to ensuring zero tolerance to crime and violence.
He told the media that his office has commenced a detailed investigations into the incident that took place during the All Progressives Congress (APC) rally in Okrika as well as the attack and attempt on a Rivers PDP convoy at Abua in Abua/Odual local Government Area, adding that he was determined to ensure that the perpetrators are made to face the wrath of the law.
The Police while soliciting for public cooperation and information said the public could send their information to the Police on the dedicated lines: 08173172215, 08173172216, the Nigerian Police Zone 6 @yahoo.com, among others, and assured of their protection. 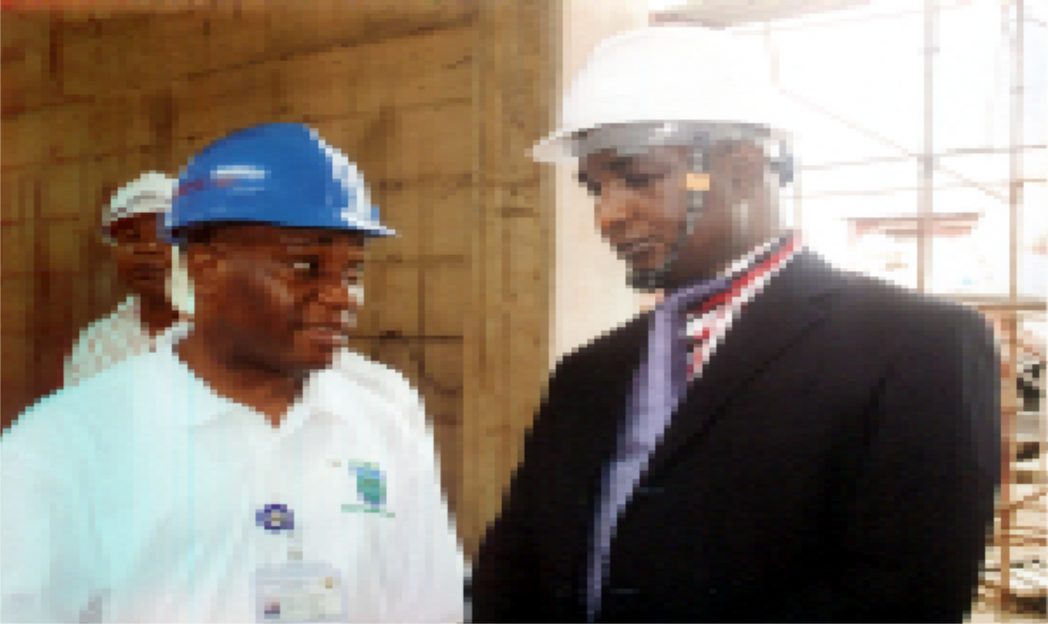 Permanent Secretary, Ministry of Information and Communications, Mr. Sam Woka (right0 with his counterpart, Ministry of Transport counterpart, Nuka Nadum Nwikpasi, at the inspection of the monorail project in Port Harcourt last Wednesday.

Rivers State Deputy Governor, Dr Ipalibo Harry-Banigo, has called on the Epidemiolocal Society of Nigeria (EPiSON) to integrate all health training institutions in the country in order to achieve a more successful collaborative effort in combating epidemics in Nigeria.
Dr Banigo, who made the call midweek in Port Harcourt as Special Guest of Honour at the Opening Ceremony of the 9th Annual General Meeting (AGM) of the EPiSON, noted that such health training institutions are reliable allies in the achievement of EPiSON’s objectives and general health care in society.
Declaring the AGM open, the Deputy Governor, who was represented by the Provost of the Rivers State School of Health Science and Management Technology, Prof Franklin E. Nlerum, harped on the link between health training institutions and EPiSON.
“In view of the linkage functions of the field of Epidemiology, I wish to call on EPiSON to fully integrate the Colleges of Health Science and Technology, and other Public Health Training Institutions in Nigeria for a more collaborative and effective team work.
“Colleges of Health Science and Technology, and Public Health institutions are charged with the training and production of qualified middle and high level Public Health practitioners who are veritable resources for partnership with EPiSON”, he said.
The Deputy Governor used the opportunity to urge the organizers of the 9th edition of the AGM to call on Epidemiologists in Nigeria to focus their efforts on “core functions of the Epidemiological profession in Public Health practice, which are Public Health Surveillance, Field Investigation, Analytic Studies, Evaluation and Linkages”.
In his welcome address, the National President of EPiSON, Prof Lawrence Ogbonnaya, noted that the theme of this year’s AGM, “Public Health Emergencies: Application of Public Health Epidemic Intelligence Tools and Techniques in the 21st Century” accords members the opportunity to brainstorm on the profession.
According to him, “it promises to be an exciting one for exchanging ideas on developments in Epidemiology and how it is used in combating communicable and non-communicable disease epidemics that continue to emerge in our world from time to time”.
He noted that Epidemiology is at the heart of global and national response to the current COVID-19 pandic.
Presenting his Keynote Address, the representative of the World Health Organisation (WHO), Dr Walter K. Mulombo, noted the intertwined nature of the world in trade and other connectivities in a world that has become a global village.

The Provost of Federal College of Education (Technical), Omoku in Rivers State, Dr Emmanuel Ikenyiri, says the ingenuity and landmarks so far created by The Tide Newspaper have raised the 50-year-old media house to a status to be celebrated by all Nigerians.
Ikenyiri, who made the remarks when the management of the Rivers State Newspaper Corporation (RSNC) paid him a courtesy visit yesterday in Omoku in Ogba/ Egbema/ Ndoni Local Government Area of the State, said The Tide has not only written its name on Nigeria’s marbles, but also proved beyond doubt that the state-owned media outfit is one among the pioneers of newspaper production in Nigeria.
According to him, The Tide in those days was among the rank of Daily Times, Concord, and Statesman newspapers from which people always wished to get vital information in Nigeria, but regretted that some of them are no longer existing.
He commended the government of Rivers State for maintaining the name, “The Tide” for the paper.
The college boss, who traced the history of The Tide Newspaper from the year 1971, assured the willingness of the institution to key properly into the 50th anniversary celebration of the Newspaper.
Earlier, the General Manager of the Rivers State Newspaper corporation (RSNC), Chief Ernest Chinwo, had said that the management was in the school to create awareness on the new developments about the corporation.
He said the corporation is not about The Tide Newspaper alone, but that the corporation is a full printing outfit that deals on books, banners, exercise books, among others.
The general manager used the opportunity to inform the management of the college  of the plan to celebrate the landmark age of 50 years of the corporation, and sought the college’s collaboration in the anniversary celebration.
Chinwo also intimated the institution of the plans to maintian the richness of the paper, and as well make it basis and a guide for future career paths to follow.

Claims that the state lost investors under the current administration has been dispelled as mere imagination and sentiments expressed by enemies of the state.
State Commissioner for Information and communications, Pastor Paulinus Nsirim made the clarifications during a media chat on Love FM in Port Harcourt.
Nsirim, who listed the achievements of the Wike-led administration, said the opposition was miserly with facts and had failed to reflect the reality on ground.
He submitted that under the Wike’s administration, the state  has witnessed huge industrial and infrastructure developments.
The information commissioner cited the case of multi construction giant, Julius Berger Plc, which currently is handling many infrastructure construction in the state.
Besides that, he also listed the case of Next Supermarket, NLNG Train 7, Gas company at Rumuji and other investments of BUA Ltd that have continued to expand despite the Covid-19 challenge across the country.
Nsirim urged the opposition to stop the attitude of painting the state bad in the media, as its bound to affect both sides of the divide.
He reasoned that claims that the state was insecure was also falsehood, considering efforts being made by government to secure lives and property.
“Parameters for judging insecurity  cannot be better than the white people. The South Korean Ambassador was here last week and rated the state high on peace and security,” he reminded the opposition.