The National Agency for
Food, Drug Administration and Control (NAFDAC), has destroyed counterfeit and unwholesome drugs worth N500 million in Anambra.
The Director-General of NAFDAC, Dr Paul Orhii, disclosed this while setting the products ablaze in a dumpsite in Awka.
Orhii said the unwholesome drugs were mostly surrendered by traders across the state.
He said that the destruction exercise was aimed at preventing the re-introduction of the products into the market.
“The products destroyed today are made up of counterfeit and fake anti-malaria, anti-hypertensive, anti-biotic, anti-diabetics, analgesics, injectables of various kinds, multi-vitamin seized by NAFDAC from the manufacturers, importers and distributors in Anambra state.
“As well as expired pharmaceutical products voluntarily handed over by Onitsha Head-Bridge Drug Market Union and compliant companies in line with regulatory guidelines.
“If not for the vigilance and timely interventions of NAFDAC, these expired and unwholesome products would have found their way into circulation and their use would have resulted in therapeutic failure, drug resistance, adverse drug reactions, kidney failure, liver failure and death.
“I wish to reiterate our stance on zero tolerance on fake and counterfeit drugs and other NAFDAC regulated products and also state that the agency will leave no stone unturned in eradicating these products from our society,” Orhii warned.
While noting that the fight against counterfeit drugs is a continuous exercise, he said that NAFDAC would not relent in the fight.
“It is in this spirit that I am soliciting for the unrelenting support of the government of Anambra State, all stakeholders, traditional rulers, religious leaders, the Nigerian Police Force, the Nigerian Custom Services, NDLEA, SON and other sister agencies, the press to sustain the tempo of the fight.”
Orhii tasked Nigerians to report any violation involving NAFDAC regulated product to the agency’s state office or formation, adding that genuine manufacturers, importers of NAFDAC regulated products should continue doing the right thing.
Earlier, the Zonal Co-ordinator of NAFDAC South-East, Mr Dauda Gimba, also urged for collective fight against counterfeit drugs.
The Chairman of Onitsha Drug Market Union, Mr Uche Eze, said that the members of the union voluntarily surrendered most of the drugs after imbibing the appeals by the executives of the union for them to abide by NAFDAC rules.
“The appeal we have been drumming to the ears of our union members on the dangers of selling or distributing unwholesome or expired drugs is yielding desired results; that is why they willingly surrendered most of the drugs, which are expired or had lose their efficacy due to their storage condition.
“We would continue to work closely with NAFDAC since its regulation is for the benefit of everyone and it would make our market and the products we sell more credible both to our local and foreign customers,’’ Eze said. 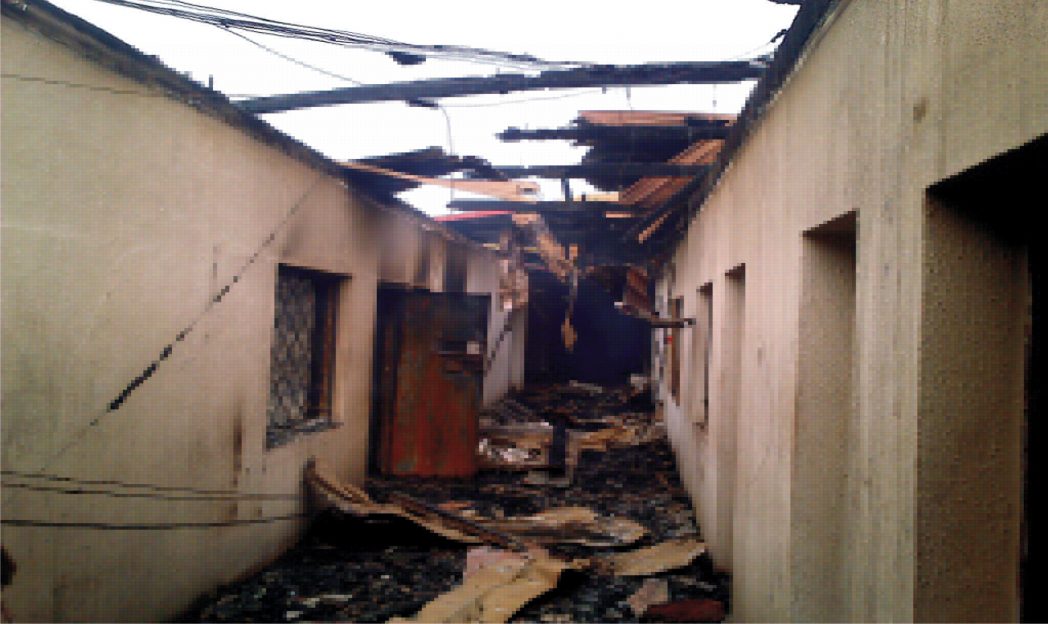 The Accounts Section of Ebonyi House of Assembly engulfed by fire in Abakaliki, yesterday.