The Nigerian Prisons Service (NPS) has de
nied reports on alleged attempted jailbreak by some convicted soldiers in Yola Prison in Adamawa State.
The spokesperson of the NPS, Mr Ope Fatinukun made the denial in a statement issued to newsmen in Abuja last Saturday.
“There was no pandemonium, commotion nor gun shot fired into the air in Yola prison as reported.
“What really happened was argument among inmates around 7.30 pm after prayers last Thursday, Nov. 27.
“The argument was quickly brought under control,” he added.

Farmers in Ekiti State have been urged to spend
the money realised from the sale of their farm produce wisely.
Mr Durojaye Omole, an agriculture extension officer, made the call in an interview with newsmen in Odo-Ayedun, in Ikole Local Government Area of Ekiti.
Omole noted that most farmers recorded bumper harvest which would lead to improvement in their living standards if the money realised from the sale of their produce was spent wisely.
He appealed to farmers not to follow the paths of some of them who marry more wives whenever they had bumper harvest.
“They should use the money on valuable projects and the education of their children.’’
He also called on farmers to plan for the next farming season by securing seeds and other planting items ahead of the season.
The agriculturist cautioned them against falling victim to fraudsters who might want to dupe them of their money on the pretence of assisting them.

Former Vice President and APC presidential
aspirant, Alhaji Atiku Abubakar has solicited the support of party delegates for his ambition to become Nigeria’s president in 2015.
Abubakar called for the support while addressing the delegates of Gombe and Yobe States in Gombe yesterday.
He expressed the desire for their votes during the party’s primaries, to enable him to succeed during the exercise.
According to him, he has spent over 30 years in politics and he deserves to be the president of Nigeria, “being the person who knows Nigeria’s problems”.

The Kano State Government has commended the Na
tional Emergency Management Agency (NEMA) for its prompt response and support to the victims of last Friday’s bomb blast in a mosque.
The Commissioner for Health, Dr Abubakar Labaran, gave the commendation in Kano when NEMA’s Director-General, Alhaji Mohammed Sidi, visited victims of the blast at the Murtala Muhammed Specialist Hospital, Kano.
“I thank you for the support we have received from you so far.
“We still have many victims on admission in our hospitals, but essentially we need emergency drugs and other consumables, which have since been exhausted.
“We have 48 victims in this hospital. We have some at Nasarawa, Dala Orthopaedic and Aminu Kano Teaching Hospitals.

Eleven PDP candidates contesting election into Katsina
State House of Assembly, were last Saturday returned unopposed in the primaries conducted in the 11 local government areas of Katsina South senatorial zone.
Our correspondent reports that the candidates got their endorsement through affirmation by delegates in the presence of INEC officials, security personnel and party representatives.
In the election conducted in Matazu LGA, Alhaji Yusuf Fele, former local government chairman on the platform of the PDP won through affirmation.
He defeated the incumbent, Alhaji Abdu Danshehu.
In Danja LGA, the former Caretaker Chairman of the council, Alhaji Tijjani Lawal, was elected as the party’s candidate in the state Assembly.

Governor Abdulfatah Ahmed of Kwara State has
scaled the screening of his party, the All Progressives Congress (APC), with a promise to make life more meaningful  if re-elected.
Ahmed made the promise yesterday after he was screened by the Olagunsoye Oyinlola-led screening committee at the APC state secretariat in Ilorin.
The governor assured the people of the state that the tempo of governance would be enhanced if re- elected for a second term as the governor of the state.
Governor Ahmed later received his certificate of eligibility from the party’s North-Central Zone Screening Committee Chairman, Chief Olagunsoye Oyinlola.
“We want to give assurance that we will be carrying out activities that will be premised on continuity of on-going projects , especially in infrastructure, “ he said.

The Director, Nigerian Army Chaplain Services (Protes
tant), Col. (Rev.) Dawuk Danfulani, yesterday said that proper nurturing of the youths would build a greater Nigeria.
Danfulani spoke during a public presentation of a book entitled: “Youth Restiveness in Nigeria: A theological Reflection’’.
“The event held at the All Saints’ Cathedral, Abalti Barracks, Lagos State.
Our correspondent reports that Danfulani co-authored the book with Rev. (Dr) Ayo Atowoju.
Danfulani also used the occasion to thank God for healing him of injuries he sustained from a road accident.
“There is dire need for everyone to focus on the development of our youths because they determine the success or failure of any nation,” he said.

The Speaker, Plateau State House of Assembly, Mr Titus
Alams, and  Mr Daniel Dem, the Majority Leader, have won their PDP primaries to contest in next year’s general elections.
Declaring the results of Saturday’s primaries in Jos, Alhaji Danjuma Musa, the Chairman, PDP Primaries Committee in Plateau, said Alams defeated seven opponents to win in Bokkos constituency.
He said also that Dem, on his part, defeated one contestant in the Riyom constituency of the State House of Assembly for next year’s elections.
Other members of the current Assembly, who were returned by the party’s primaries include, Mr Diket Plang, representing Pankshin North, and Mr Yakubu Choji, representing Jos North West Constituency.
The Assembly’s former Speaker, Istifanus Mwansat, representing Pankshin South, also defeated other aspirants to emerge as the party’s flagbearer, while Zainab Dogo, member representing Quan’Pan South, also scaled through.

A former Special Assistant to Governor Sule Lamido of
Jigawa State, Malam Umar Danjani has emerged winner of the Hadejia constituency at the PDP primary election for the PDP state House of of Assembly.
Our correspondent reports that Danjani, who was the sole candidate in the election, scored 71 votes.
Alhaji Abdullahi Buama, the Chairman, Election Committee, who announced the result, said the delegates had unanimously voted for Danjani to represent the party in the 2015 election.
Alhaji Abubakar Danyaro, the Chairman of the PDP in Hadejia, called for unity among its members to ensure victory of the party in the 2015 general elections.
Danyaro also enjoined members of the party to support its leadership to move it forward. 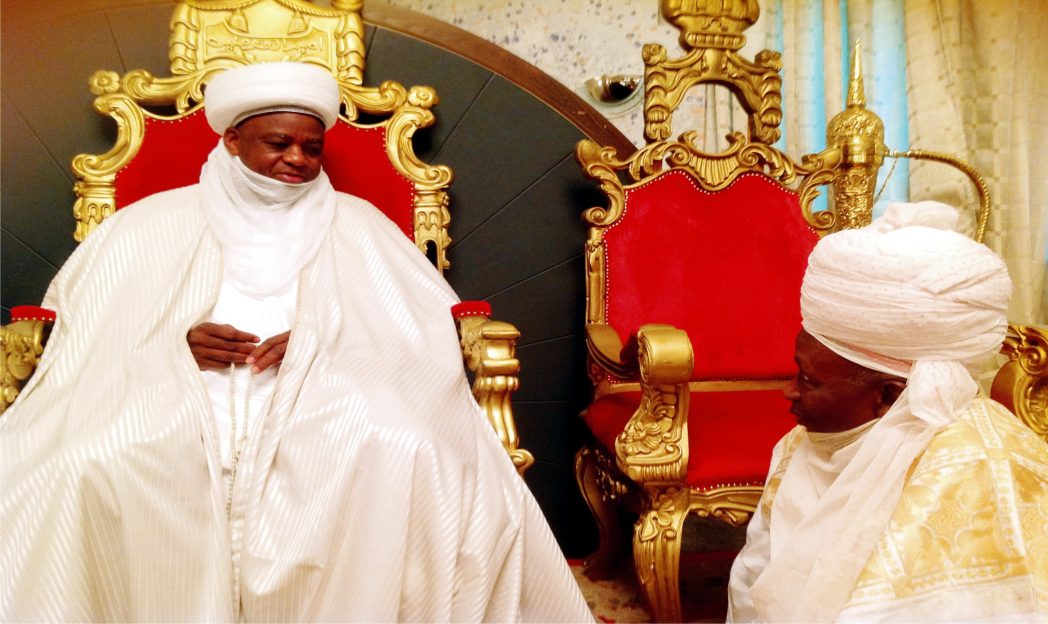 Sultan of Sokoto, Alhaji Sa’ad Abubakar 111 (left), with former Mininister of Education, Alhaji Yarima Abubakar, who paid him a visit in Sokoto recently.