The Federal Road Safety Commission (FRSC) said that 50 per cent of road crashes in the country was due to violations of speed limit.
The Commander of Benin zone, comprising Anambra, Edo and Delta, Mr Charles Akpabio, said this at the inauguration of December safety campaign in Awka.
Akpabio, who spoke on the theme of the campaign entitled “Road Safety is a Shared Responsibility it depends on you’’, stressed the need for strict adherence to safety regulations by motorists.
He said everyone must be involved in road safety because there was nobody who did not use the roads as part of his journey.
The commander said every motorist like any other human being had some element of insanity in him, adding that a good driver was one who drove with the mindset that other road users were ‘mad’.
Akpabio warned that the road marshals in the zone would be strict with the implementation of all safety rules and regulations, especially as the yuletide drew closer            .
“All of us, over 170 million Nigerians are involved in this safety business,  we make journeys on the roads directly or indirectly, so we must all join the campaign for safe motoring in Nigeria.
“Lack of attention to simple regulations, and most especially speed violations alone, cause more than 50 per cent of crashes on our roads.
“So, we are going to deploy radar guns, tranquilisers in our patrol exercises to ensure that we reduces crashes by at least 25 per cent this yuletide,’’ he said.
Earlier, in his address, Mr Sunday Ajayi, FRSC Sector Commander in  Anambra, called for the collaboration of all stakeholders, including drivers, security agencies, and corps members to raise the awareness on road safety.
Ajayi pointed out that corridors in Anambra were very important accesses to other states in the country, and pledged to eliminate the gridlocks that hit the Onitsha end of the River Niger Bridge at Christmas periods.
He thanked the Anambra government for their assistance to the FRSC in the provision of logistics for their operations and the training of drivers in its employ.
“The Anambra government has always provided the enabling environment for the command and we will continue make effective use such opportunities to achieve effective service delivery.
“I, therefore, plead for the collaboration of all to make this festive period a successful operation and accident free,” he said.
In his remarks, Gov. Willie Obiano, thanked the command for the safety level recorded on Anambra roads, and promised continued partnership with the FRSC.
Obiano, who was represented by Mr Chuma Mbonu, Commissioner for Transport, said that his administration was paying huge attention o road infrastructure in the state to ease traffic within the state.
He said that part of this efforts was the construction of three bridges in Awka metropolis, saying that his government was concerned about ensuring that roads in Anambra were safe for all users. 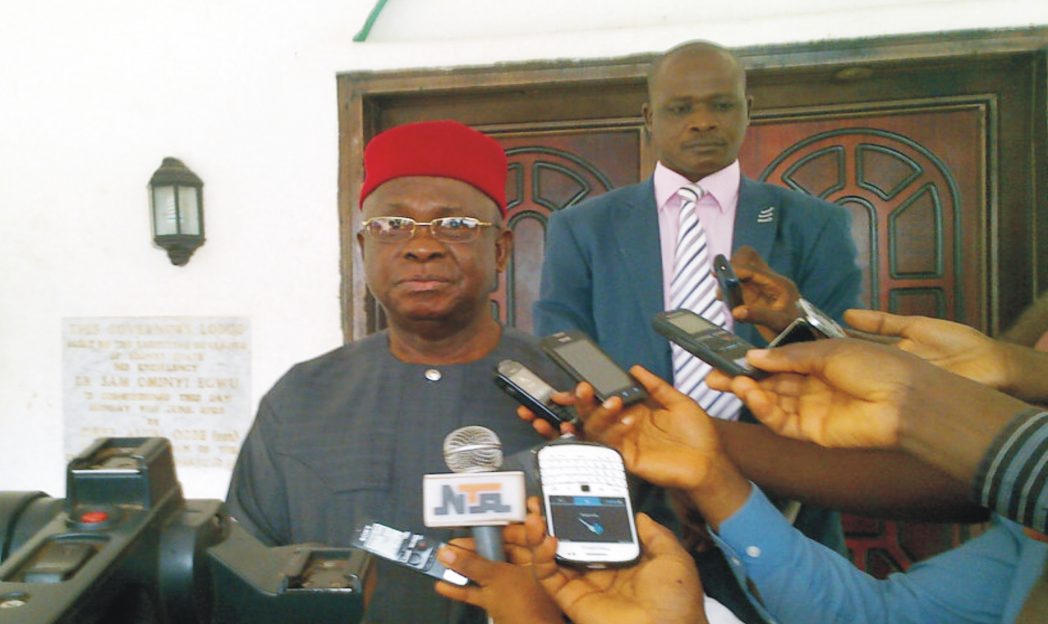 Governor Martin Elechi of Ebonyi addressing newsmen in Abakaliki on his Mediation in the crisis rocking the State House of Assembly, recently