Officials of Adamawa State Hunters Association
assisting the military in the fight against insurgents in the state have called for public support and prayers for victory over the insurgents.
Officials of the association made the call in an interview with newsmen in Yola, saying their members were committed to contributing their quota toward curbing insurgency in the country.
Philips James, the Secretary of the hunters association, said “we need the peoples’ support and prayers. We also need government’s assistance in this assignment.”
James urged the public to be vigilant and be security conscious, as well as prayerful for victory over the insurgents.

The Bama Development Foundation, an NGO, said
yesterday that it had registered 180,000 Internally Displaced Persons (IDPs) from Bama taking refuge in Maiduguri.
Malam Mohammed Hassan, the Chairman of the foundation, stated this at a news conference in Maiduguri.
Hassan said that the IDPs were in four camps in Maiduguri.
According to him, the IDPs are those displaced during attack on the town by insurgents in September.
“We have recorded about 180,000 IDPs from Bama taking shelters in four different camps in Maiduguri as at October 31.
“The camps are located at the Yerwa Girls Secondary School, Women Teachers College, NYSC Orientation Camp and Government Girls College, Maiduguri’’, he said.

The Minister of Industry, Trade and Investment, Dr
Olusegun Aganga, said  the Federal Government had identified 100 companies to be rewarded for contributing to the nation’s economic growth.
Aganga told newsmen in Abuja that the private sector was behind the country’s ranking as number one economy in Africa and one of the top 10 economies in the world.
According to him, over the last three years Nigeria has attracted more foreign direct investments and more local investments than any other economy in Africa.
“Earlier this year, the prestigious Wall Street Journal Frontier Market Settlement index which surveyed blue chip companies in developed economies ranked Nigeria number one country of global interest to investors.
”We are proud of these achievements because it is investors that create jobs for our people, wealth, facilitate economic growth and generate income for the government.

The Kano State Government said it spent N754.8
million on the construction of 74 public toilets in 74 rural markets in the state.
The State Commissioner for Rural and Community Development, Alhaji Garba Durbunde, disclosed this in an interview with newsmen in Kano recently.
Durbunde said that the provision of the toilets which was also supported with solar-powered boreholes was to stop open defecation in the communities.
He said that the projects were executed in the last two years, adding that they were jointly financed by the state government and benefitting local government areas.
He said that N407 million was spent on the construction of the boreholes while the toilets gulped N338.8 million.
Katsina

Malam Ado Sama’ila, the Education Secretary,
Dandume Local Government Education Authority  in Katsina State, has urged parents to encourage their daughters to study in tertiary institutions in order to maximise their potentials.
Sama’ila made the call in an interview with newsmen  in Dandume.
He said it was important for parents especially in rural areas to stop  the habit of preventing their daughters from obtaining higher qualifications after secondary school.
The education secretary said that the practice limits the abilities of girls to contribute more meaningfully to societal development.

A Consultant Public Health Physician, Dr Abdul-
Hakeem Abiola, said last Wednesday that lack of toilets was putting public health at risk.
Abiola, who works at the College of Medicine, University of Lagos, made this known in an interview with newsmen in Lagos on the World Toilet Day.
“Human faeces or human excreta is a source of infection and it is an important cause of environmental pollution.
“The health hazards of improper excreta management and disposal are one: it can cause soil pollution; it can cause water pollution; it can cause the contamination of foods and it can lead to propagation of flies, which can act as vectors for many diseases.”

The Governing Council of Nasarawa State University
(NSUK), Keffi, has approved the appointment of Prof. Yakubu Ngwai and Dr Sa’adatu Liman as new Deputy Vice Chancellors, Administration and Academic respectively.
Notice of the appointment is contained in a statement signed by Prof. Muhammed Mainoma, the Vice Chancellor of the university, made available to newsmen on Thursday in Keffi.
The statement quoted Mainoma as saying “the decision to confirm the appointment of the two officers was taken at the meeting of the council, in line with the law that established the university.
“The confirmation of the appointment, which is for five years, starts with immediate effect.’’
Our correspondent reports that until their appointments, Ngwai was the Dean, Faculty of Natural and Applied Sciences, while Liman was the Head of Department of Islamic Studies and Deputy Dean Students Affairs.

A Chief Magistrates’ Court sitting at Iyaganku, Ibadan,
has remanded a 45-year old John Jimoh in prison custody for allegedly issuing a dud cheque.
The Chief Magistrate, Alhaja Fatima Badrudeen, remanded Jimoh in Agodi prison pending his arraignment at the Federal High Court in Ibadan.
Jimoh, residing on Banji Street in Akuru Elebu area of Ibadan, was arraigned on a two-count charge of issuing a dud cheque to and obtaining money from a bank without paying back.
Jimoh was alleged to have obtained the sum of N500, 000 loans from Apex Trust Micro Finance Bank in Ibadan on September 4 with a promise to repay.
The Prosecutor, Insp. Adewale Amos, said Jimoh promised to repay the money within 30 days as agreed with the bank.

Journalists from Sokoto, Kebbi and Zamfara  State have
called for adequate budgetary allocation for the Polio Eradication Initiative (PEI) in the country.
The journalists made the call at the end of a two-day media sensitisation/ review meeting on strategies to interrupt the transmission of the wild polio virus.
No fewer than 49 journalists attended the meeting held between November 17 and November 19, which focused on polio in the context of immunisation and child survival.
“There should also be the timely release of funds and physical involvement of PEI and other child-survival issues.
“Media practitioners and their organisations should continue to utilise their special positions in the society to strengthen and sustain the polio eradication and other child-survival programmes,’’ they said.

Journalists who die in the line of duty should be given
post humous awards, Alhaji Bello Yero, Permanent Secretary, Bureau for Local Government and Chieftaincy Affairs in  Taraba State, has suggested.
Yero made the suggestion while interacting with newsmen in Jalingo recently.
Extolling the virtues of journalists across the world that died in the line of duty, he said the slain journalists were heroes who deserved honour even in death.
“It is my considered view that such journalists should be given post humus awards.
“Journalists in Nigeria had the track record of covering violent conflicts even though it had often put their lives in danger. 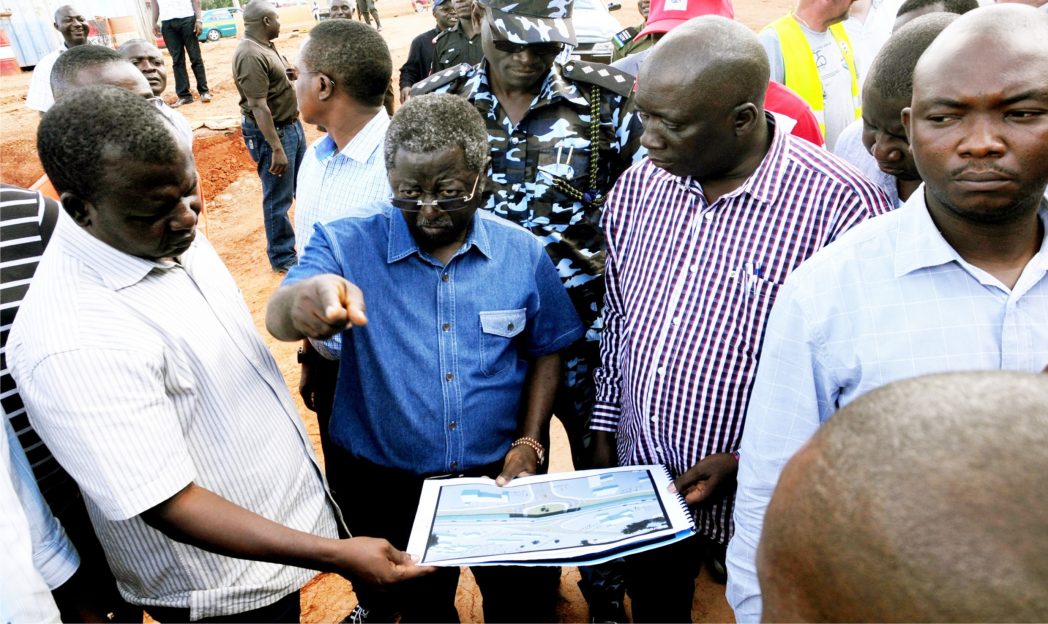 Gov. Jonah Jang of Plateau (2nd left), going through a plan of a Bridge at the Secretariat junction, Yakubu Gowon way, during inspection of road projects in Jos recently.