Ranchers Bees have
debunked allegations that their fans attacked Kwara United and so caused a final day NNL match in Kaduna to be abandoned.
Media officer of Ranchers Bees, Vincent Akinbami, said there was no truth in allegations levelled against his team by Kwara United that their players and officials were assaulted and attacked by the fans of the Kaduna team during their Week 30 game, which ended in the 75th minute with the scores even at 2-2.
Akinbami described the allegation as untrue, unfounded and a cooked-up story by the Kwara United officials to have reasons for abandoning a match that was getting beyond their reach.
He said, “The act put up by the Afonja Warriors officials was childish and could pass for a home video.”
Akinbami further questioned, “Why will the fans of a team who just equalized, coming from 2-0 down beat up their opponent, seize camera from their camera man and all the fiction Kwara officials came up with?
“There was no attack on anybody before, during and after the match, as the management of Ranchers Bees provided adequate security both within and outside the stadium.
“We scored two top-class goals, we got our first goal through a header and the second one by Sunday Ibeji was a blinder from 30 yards and the Kwara United officials knew more goals will come the way we were playing, so they thought their best option was to abandon the match and claim an attack on them.”
Akinbami added: ”When we scored the second goal, Kwara United officials sitting on their bench ran on to the pitch claiming they were attacked by Ranchers Bees fans.
“They stood on the pitch for 15 minutes, refusing to continue play after which the referee signalled the end of the game.
“I have never seen anything like that before, running onto the pitch while no one ran after them.”
He claimed that Kwara United Officials attempted to instigate the fans to fight as they threw stones at the Ranchers Bees chairman.
“At the end of the game I saw Kwara United officials throwing stones at the chairman of Ranchers Bees Abdulazeez Mohammed, who remained calm, knowing that the Kwara United wanted to instigate the crowd to attack them so that they can have what to hold on to,” he said.
“Two Kwara United officials were sanctioned from the bench by the centre referee for insulting the fourth official, and this official was booed by the fans.” 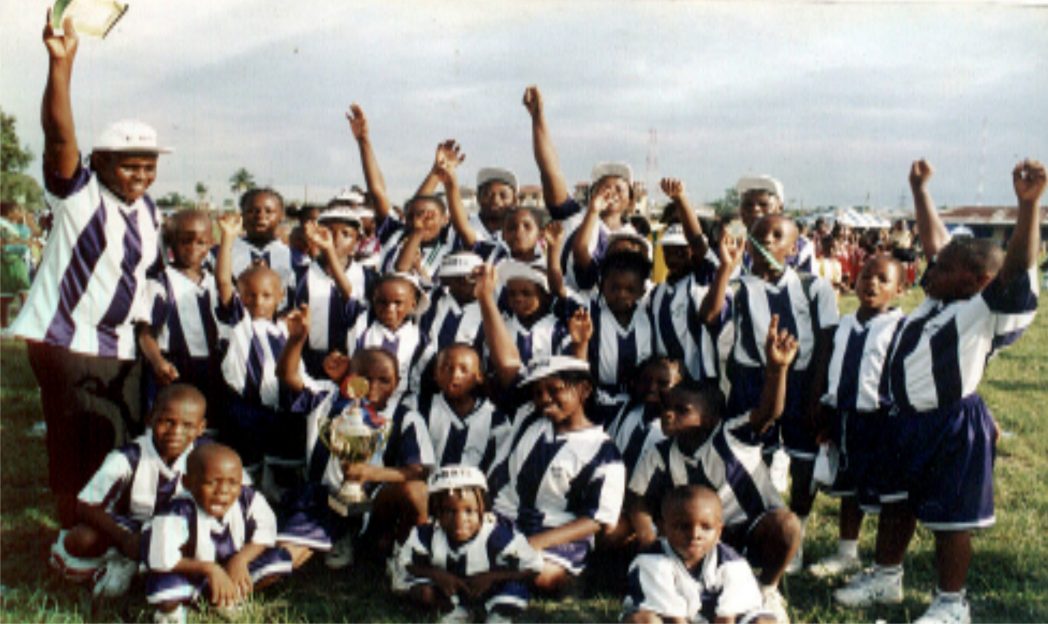 Secondary school children celebrating with their trophy after schools competitions.